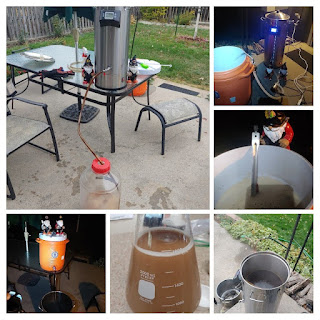 When I bought my Anvil Foundry ... there were two main reasons I thought I would like electric brewing.
The first thing is something I take advantage of quite a bit ... I can set a timer on the Foundry to start heating strike water while I'm sleeping so that I can start brewing right when I get up in the morning.
The other big thing is that the electric boil doesn't get affected by a windy day as much as my propane burner.
As I've brewed with the Foundry, there are two disadvantages I've found over my old mash tun / propane burner system.
The first disadvantage isn't that big of a deal to me, but especially for bigger ABV brews, my mash efficiency isn't as good as it was with the "older" method.
The second disadvantage is that it takes much longer to get from mash temperature to boiling. Generally, it takes about 45 minutes to get from 155 degrees to 200, which is boiling for me at my high-altitude. 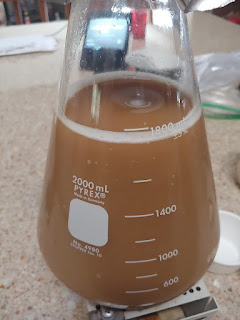 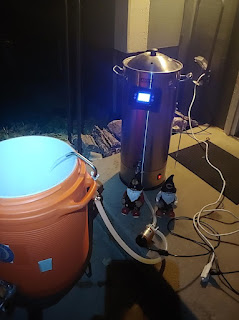 So, I started out the night before, heating up my full volume of strike water and sparge water to be heated starting early morning so that I would be ready to start brewing when I got up.
I pumped the water from the Foundry into my mash tun, and added the grain. Then, I let the enzymes do their thing. 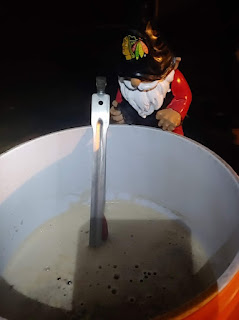 My intention was to then use my old kettle on the propane burner.
But, the wind started to pick up, so I decided that I would use the Foundry as the boil kettle.
Since this was a last minute decision, I had not planned for the bigger boil-off rate of the propane burner than the electric so I had to make changes on the fly. Basically, I had to boil longer than I had planned.
As it turns out ... almost twice as long.
I did actually use propane burner to get the wort from mash temperature to boiling, dumping it into the Foundry for the boil itself. I think this saved a bunch of time. 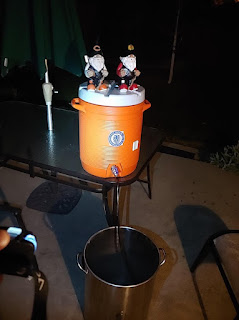 Once the wort was boiling in the Foundry, I kept checking the gravity to figure out when to start my timer.
As I mentioned above, it turned out being more like a two hour boil.
I simply delayed the start of the brew timer.
Magically, I came really close to my expected volume and gravity number using this method. My OG was 1.069, which is real close to the planned 1.070 gravity. 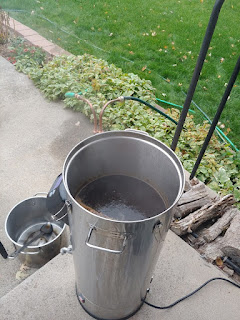 After the boil, chilling, racking, and pitching was pretty much the same as always.
Obviously, I had a little more clean up because of using more things to brew with, but it didn't really take any more time after the brew day. 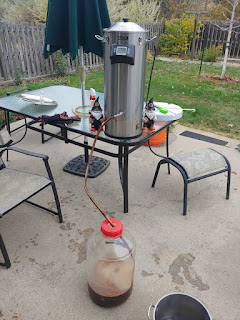 I actually really like this hybrid approach for bigger beers. If I do this again, I hope I'll plan better so I don't have to boil off so much water to get to my volume / gravity.
I probably will do this again.
As far as the fermentation, it was going strong by the time I got up in the morning.
I expect it will take a little longer to ferment this beer than my usual batches. The main thing that increases the time I think is letting the cocoa settle.
I am really looking forward to seeing how this beer turns out.

As always stay tuned on the regular SheppyBrew Channels to see what is happening with beer and other things: SheppyBrew's Facebook Page; Sheppy's Twitter Feed; SheppyBrew's Instagram Page; and SheppyBrew's Website.Of course, don't forget to visit this blog often as well!
Posted by ESheppy at 11/04/2021 05:32:00 AM