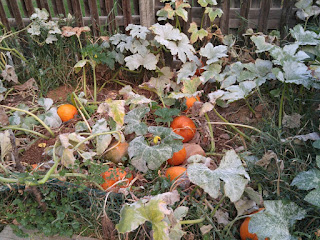 As you know if you follow this blog or the SheppyBrew Facebook Page, Sunday was a brew day for me.

We actually grew pumpkins in our garden this year, but we didn't use those in the pumpkin beer. They are not pie pumpkins. They are jack-o-lantern pumpkins. Plus, my wife tells me that they are not ready to pick yet. Something about a finger nail test? 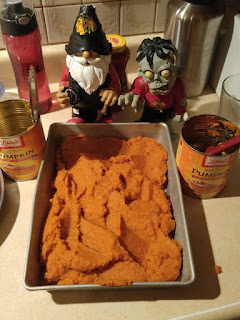 The mash is the same as a usual beer mash except I added mashed up pumpkin to the tun about 45 minutes into it. Before adding pumpkin, I heated it to 350 degrees. The idea of cooking the pumpkin was to get maybe a bit of caramelization, but that didn't really happen in the amount of time I cooked it. Not a huge deal. 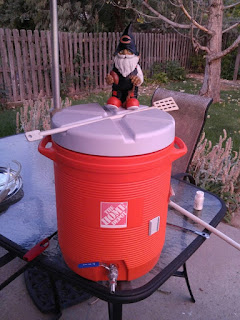 Just like last year's pumpkin ale brew, the wort was extremely clear even without a vorlauf. My mash didn't get stuff, but the wort did drain slower than usual.

I ended up heading off to church while the last of the wort drained from the mash tun into the brew pot. 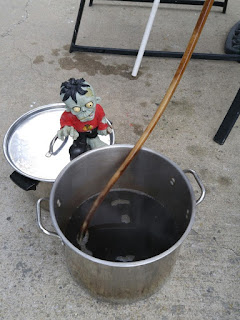 After church, I came home and started the boil.

My pre-boil gravity was right on target with more than usual volume. Again like last year, the pumpkin appears to add only a couple of gravity points to the OG. 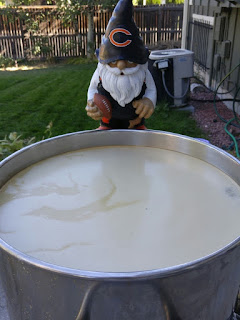 The boil went as planned. I remembered to add in the hops at the right time. I remembered the yeast nutrient. I even added whirlfloc this time. And, the wort going into the carboy was extremely clear. I don't think this was the case last year. 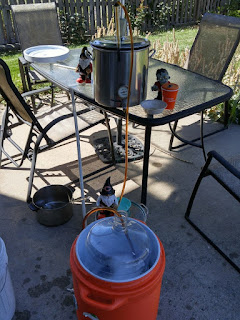 Although the recipe doesn't call for it, I put about a tablespoon of my pie spice tinkture in with the wort.

I chilled to about 75 with the wort chiller. I used ice to get the wort down to 58ish after that.

The beer was fermenting nicely when I looked at it this morning.

So, everything is going well so far. I suspect that we (or at least my wife and her friends) will start drinking this around Halloween. I suspect that it will be better around Thanksgiving, so hopefully the Beer Model doesn't drink it all too quickly.

I'll let you know how it tastes (and how my wife thinks it tastes) through the usual channels.