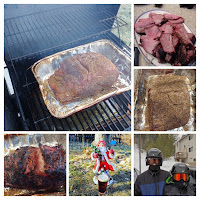 As I mentioned in Double Smoked Ham, I had a couple of Christmas dinners to make this year. The first was the Sunday before Christmas with some family. I cooked that ham on my smoker.

The second was our family Christmas dinner. This one was a 6 lb Ribeye Roast that our local super market had on sale for Christmas.

I had never made a Ribeye Roast before this year. It really isn't difficult at all.

The night before, I trimmed a bit of the hard fat on the roast and applied Montreal Steak Seasoning over the whole thing. I let it sit in the fridge overnight.

Around 10 the next morning, I started up the smoker with charcoal and hickory chunks. I put the roast on the smoker in a roasting pan around 10:40. 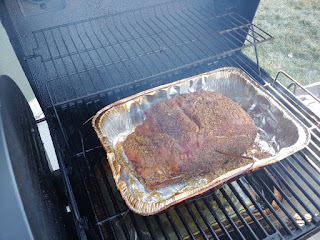 Then, I just let it cook at between 250 and 270. From time to time, I added more hickory, but didn't really do much else to it other than watch the temperature. 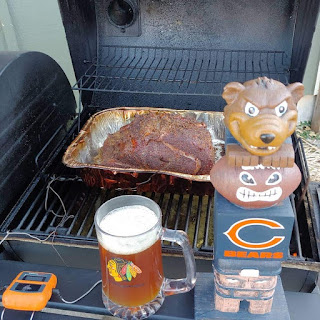 At 1:30 it was around 135 internal temperature. I seared the meat for about a minute per side. 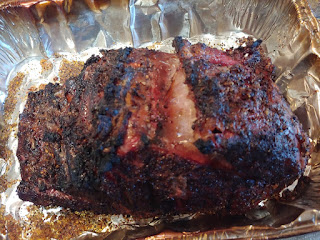 Then, I pulled the roast off the smoker and let it rest for a bit.

I cut it up. Some of use had sandwiches. Some just had the slices. Everyone thought it was yummy in the tummy. 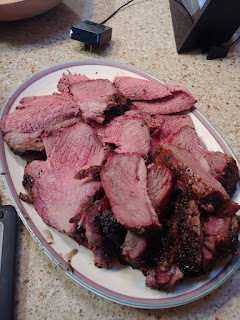 It was a nice medium rare. The meat was nice and juicy. The seasoning tasted great. It was a great Christmas meal.

It was also wonderful as leftovers.

Easy peasy. I'll watch for this to be on sale again in the future.