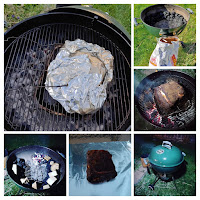 So, this year, the AHA Big Brew Day was Saturday May 4th.

Because we were hosting, I thought it would be nice to have something smoked for our guests to eat. A pork butt seemed like a great candidate.

The only problem with pork butt is that it always takes me right around 12 hours to cook and at least an hour to rest. To be ready by noon, I'd have to start the cook before midnight.

On my older smoker, I would not be able to get much sleep.

But ... as I mentioned in I bought a Weber Kettle, one of the things I wanted to try was an overnight cook with the "snake method". This was a perfect opportunity to see how it worked for me. 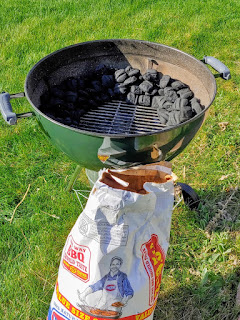 My snake isn't as pretty as most I've seen pictures of other people doing it. Mine got the job done, though. As you can see below ... the snake went most of the way around the kettle. Two or three briquettes thick and a couple high. I put hickory chunks on top as well. 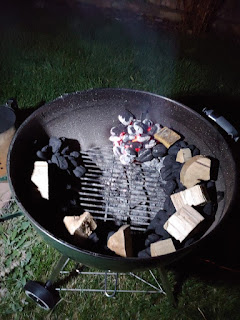 I got the meat on around 9:15 Friday night. Since I'd never done this overnight cook thing before, it would be better to get done early and let it sit than it would to get it done late and have people getting hungry. 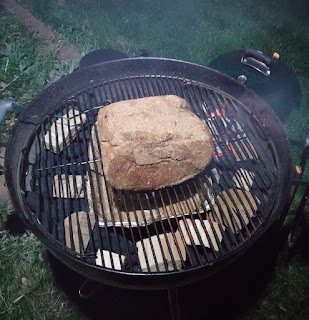 I was able to get sleep, but I woke up a few times to check my temperature remotely. I suppose the temperature might have spiked when I was sleeping, but based on what I saw, it seemed pretty consistent all night long. 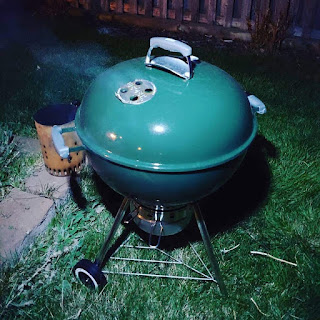 I did even open the kettle to check once around 1:15 in the morning. It was going wonderfully. The snake was about halfway done.

I woke up a little before 5AM to check too. Things were still going well. 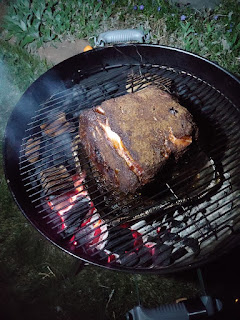 A little before 6 AM, I decided to wrap the butt. I still had plenty of charcoal left. The internal temperature probe said 180, which is higher than I usually wrap. I probably could have let it just go to completion. But, I didn't. 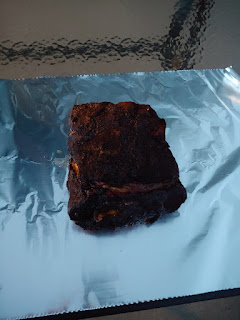 And ... around 8 AM, I pulled the butt off the kettle and put it in a cooler to rest until lunch time.

There was still about an hour worth of unlit coals left. About perfect for a 12 hour cook. 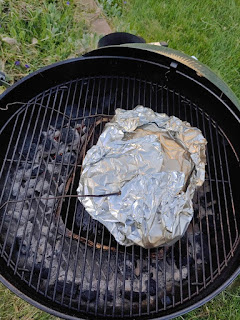 The meat was still hot when I pulled it apart for lunch. It was very tender. Very delicious. Not sure it got as much smoke flavor as I usually get, but the crust got enough that we knew it was smoked.

My wife made barbecue sauce, but I preferred the pork without the sauce.

Everyone enjoyed the lunch.

I have to say that this process exceeded my expectations. I never would have been able to do this and still get some sleep on the other smoker. The fact that the charcoal burned perfectly was great.

I'm going to have to try other meats on the kettle with the snake method.