The original NTS batch was a nice beer, but I didn't consider it "lager-like".

One of the reasons I brewed the Double Batch of N.T.S was that I could brew half with Kveik yeast and half with lager yeast and see if I could tell the difference.

Last week, I did a "blind" triangle test to see if I could tell the two beers apart. 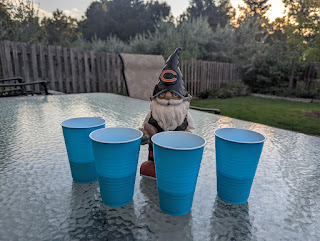 To do the blind taste test, I took 4 cups. Two of them, I wrote "1" on the bottom and filled with Falling Leaves Autumn Saison. On other two, I wrote "2" on the bottom and filled with Lithuanian Autumn Ale.
Then, I closed my eyes and moved the cups around long enough that I had no idea which cup was which.
I separated three cups from the other 1. Out of those 3, the blind taste test was to see if I could identify the 1 that was different than the other two. 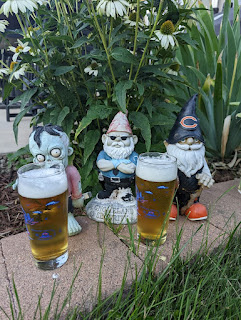 As it turned out, It was fairly easy to tell the beers apart, but honestly, they were closer than I thought when I was tasting them knowing which was which.
On the aroma, there was a bit of a lemony ester on the Faux (Kveik) pilsner.
Flavor was actually real close, but the lager was crisper and the hops popped a bit bit more with the Kveik beer. 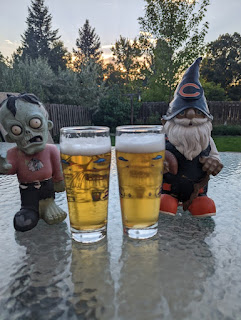 After the "blind" test, I poured a couple of pints to compare visually.
The color was exactly the same. The Faux (Kveik) pilsner was considerably more clear, but I just checked them again and the lager has caught up in clarity. When it comes right down to it, I think I like the Faux (Kveik) Pilsner more than the Actual (Lager) Pilsner ... mostly because the lemon ester that make the hops "pop".

I'd gladly drink either beer, though.