G is for Golden City Brewery 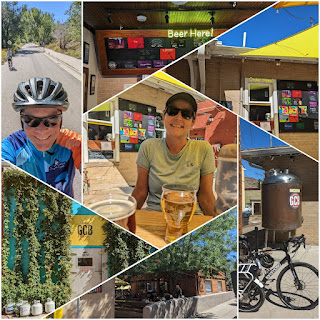 Well ... you probably know that I've been doing a ton of riding for the Great Cycle Challenge this month.
If you follow me on Instagram, you might have noticed that last Saturday, I passed up my 1000 mile September.
If you paid attention to Saturday's Instagram post, you also noticed which "G" brewery we picked.
I started off the morning with a 57 mile ride (see #GCCUSA2022 Ride #32), which actually got me over the 1000 mile September.
When I returned, my wife (aka the SheppyBrew Beer Model) wanted to go on a bike ride too.
So ... we headed out on a ride together (see #GCCUSA2022 Ride #33), and headed out to our "G" brewery.
G is for Golden City Brewery 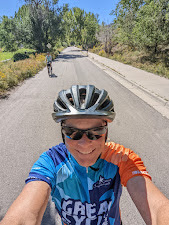 If you've been following this blog for awhile ... you've seen posts about us visiting Golden City Brewery a few times.
For a real blast from the past ... check out "Boys' Day" from back in November of 2008, which includes a picture of my very small boys in front of a sign that says "Golden City Brewery. 2nd Largest Brewery in Golden".
At the time there were two Golden Breweries. One REAL big you might have heard of ... and tiny Golden City Brewery. 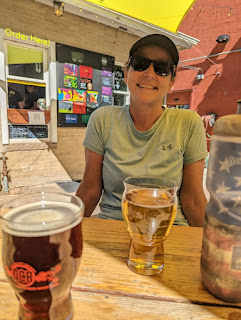 I don't think Golden City Brewery is still the 2nd largest brewery in town, but it has grown nicely over the years.
It is an awesome neighbor brewery with a tiny tasting room and a fantastic beer garden.
Usually when I ride by during business hours, I see some a food truck our front. 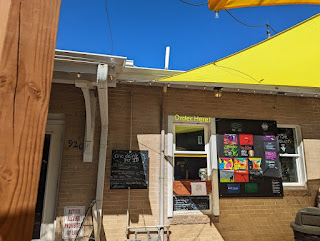 Their beer selection is pretty good. The outdoor seating is great. The food trucks are pretty awesome too.
And, on a sunny September day, it is the perfect cycling destination. 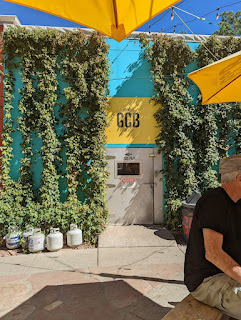 One thing I'll mention about Pile High Burgers ... which is the food truck that was there on Saturday ...
They do not have anything small. The burger and tots I had plus the half a burger my wife didn't finish and I didn't want to let go to waste was too much for a lunch in the middle of a bike ride. 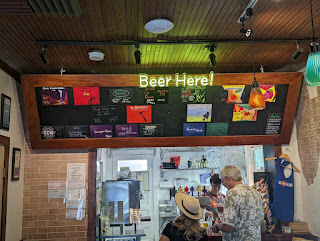 And ... I rarely complain about getting too much food ... 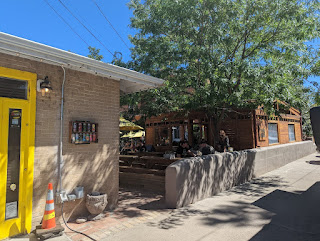 Anyway ... check out Golden City Brewery when you get a chance. It is a great local brewery. 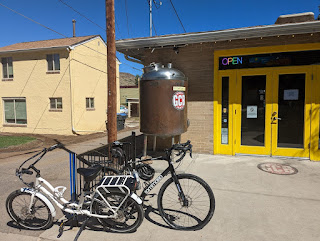 Next up ... "H".
According to the Colorado Brewery Map & List, there are a bunch of "H' breweries in Colorado. However of the ones close to us, we've covered them already. I'm not sure where we'll end up ... but we'll come up with something.
Keep an eye on  Sheppy's Blog: A to Z to see what we end up going to.
And ... as always stay tuned on the regular SheppyBrew Channels to see what is happening with biking, brewing, barbequing, and other things: SheppyBrew's Facebook Page; Sheppy's Twitter Feed; SheppyBrew's Instagram Page; and SheppyBrew's Website.Of course, don't forget to visit this blog often as well!
Go Bears!
Posted by ESheppy at 9/29/2022 12:04:00 PM