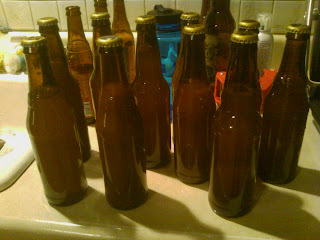 I put my gallon of simple cider into 10 12oz bottles tonight. I used 3/4 tsp sugar in each bottle to carbonate the cider. The cider ended up with a 1.003 finishing specific gravity, which comes to 5.9% alcohol (by volume). That is over 93% apparent attenuation.  Obviously, cider is more fermentable than the beers I usually make.

I did not take a taste, but the aroma reminded me a bit of La Folie.  It will be interesting to see how this turns out.  Based on the aroma, I think it might be a bit more sour than I would think a cider should be.  Obviously, I won't know for sure for awhile.  I should probably let these bottles condition for a long time, but I know I'm going to want to try some sooner rather than later.
Posted by Sheppy Brew Master at 3/22/2011 11:17:00 PM