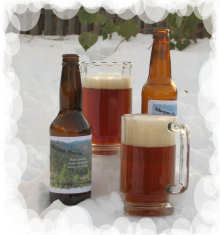 I sort of jokingly refer to my "world famous" Phat and Tyred Amber Ale. It is one of my favorite SheppyBrews. Not only does it taste wonderful, but it was also my first completely non-Mr. Beer recipe. It was my first partial mash. It was one of my first all-grain beers. It is one of the beers that I've brewed over and over again, and tweaked the recipe just about every time. I've only brewed Buckwheat's Belgium Pale Ale more often.

When I recently shared with my Mr. Beer virtual friends that I had only brewed 3 times last quarter (see 2nd Quarter 2011 Brew Stats), I got a response from one of the guys, "I brewed your Fat Tire Clone 3 times this past quarter if you want to add that to your stats...". (don't believe me? click here)

So, I guess my Phat and Tyred Amber Ale  is "world famous"! This is at least the third non-Sheppy brewer that has made a version of this beer. There are one or two others who told me they were going to brew it, but who never let me know if they ever actually did. If I know about these people, I'm sure there must be countless more who have or are planning to brew it as well.

It usually gets referred to as my "Fat Tire Clone". Although it did start out as an intended clone, I do not like to call it one now. I've purposely modified the recipe away from being exactly like Fat Tire to more perfectly match my tasting preferences. It is fine if others call it my Fat Tire clone, though. I'm just honored that they recognize it. 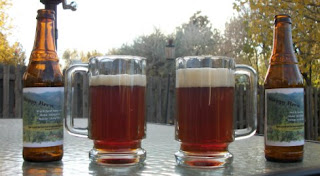 Of course, I had intended to brew Phat and Tyred Amber Ale to be my first kegged beer. But as you may recall (Worst brew day ever?). Things got screwed up and I ended up with "Fat and Stoopid" instead. While a very good beer and a wonderful way to start kegging (and a beer that did not last long at all), Fat and Stoopid was certainly not the same as my Phat and Tyred Amber Ale.

And so, I've decided what I'm going to brew next. It is going to be my 7th batch of my world famous Phat and Tyred Amber Ale. I've updated the recipe just a bit, mostly to account for alpha-acid percentages in the willamette and fuggle hops that I have. My recipe is now based on a 5.5 gallon batch instead of 5 gallon.
Posted by ESheppy at 7/14/2011 03:29:00 AM