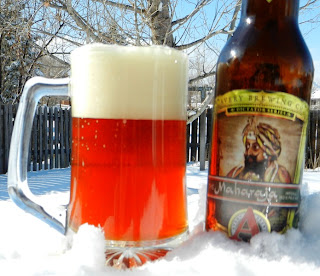 I tried my bottle of the Maharaja on Super Bowl Sunday after we got home from our trip to Breckenridge for my birthday weekend. I'll be posting pictures of Breckenridge in the next couple days. Stay tuned!

The Maharaja poured ... well ... it poured foamy. Knowing it was a big IPA, I probably should have adjusted, but my initial pour yielded about 4/5 of the glass of a thick white head. I should have poured more carefully.

The color is a nice copper - orange. It is nicely carbonated, but not overly so. As you can imagine, I got lots of citrusy hops in the aroma.

The flavor is bitter and hoppy with a pretty good malt backbone. I might pick up a little of the alcohol, but certainly not as much as you would expect with a 10% beer. It certainly was not as boozy as the Hopslam I had last weekend. The alcohol also did not hit me as hard as the Hopslam I had last weekend. I'm sure the fact that I was down a pint of blood had nothing to do with that.

I enjoyed this beer and suggest you go ahead and pick some up to try if you can find it.