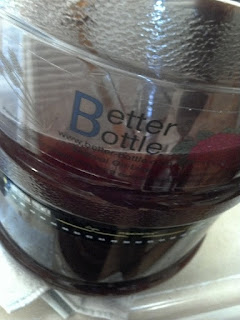 Tonight, I finally kegged up my Raspberry Wetta Berry "beer".

I blogged about brewing it with Wetta Berry Mr. Beer Batch.

I blogged about adding raspberry puree to it with Raspberry Wetta Berry.

I didn't take an original gravity reading, but based on other Mr. Beer batches, I figure it was about 1.045. It finished at about 1.010. This means that without the raspberry puree, the ABV would have been right around 4.4%. The raspberry puree doesn't add much sugar, so this is almost certainly under 5%. I would guess around 4.7% ABV.

Tonight, I mixed in 4.5 ounces of sugar into the keg and bottled 6 liter bottles, 3 bombers, and 4 12-ounce bottles. The rest (about half I would say) stayed in the keg.

I will probably let the keg carbonate for a couple of weeks and then put it into my trusty keggerator.

The bottles will probably stick around a bit longer. We'll see how the beer model likes the beer. It is a bit too much raspberry for me, although I do believe that I will enjoy having it on hot lazy Saturday and Sunday summer afternoons.