A few days after I closed out my quest to try the beers on Zymurgy's 2011 Best Beers in America list, I found Dogfish Head's Indian Brown Ale in my local liquor store. Indian Brown Ale was tied for 34th on the list. Even though I had already moved on to the 2012 list (which did not include Indian Brown), I decided to grab the six pack and blog about it.

Dogfish Head's Indian Brown Ale is a year-round beer. The Dogfish Head website calls it "a cross between a Scotch Ale, an India Pale Ale and an American Brown". It is meant to be a magic blend of hoppy and malty. Its IBU are listed at 50 and its ABV is 7.2%.

If you are familiar with my beer preferences, you can probably imagine that I was really excited to try this beer. I love well hopped beers with more complex malt characters than the typical American IPA.

You might remember that I absolutely loved Boulder Beer Company's Flashback India Brown Ale. I have mentioned over and over how much I like Hoppy American Red Ales and Black IPAs. I just love these IPA-like-but-not-really-IPA-beers. 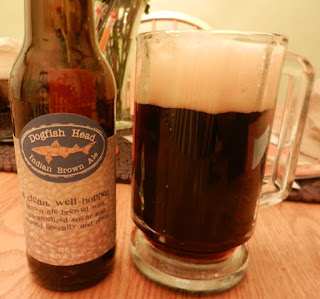 This beer was no exception. It is fantastic. Sam and his crew do great work.

The malt aroma has lots of rich caramel and chocolate. The dry-hopped citrus hops come through, although not as much as I remember in Flashback.

The flavor is very nicely balanced. Again, there is caramel and chocolate. It is a very rich malt backbone. The citrus hops are there. I didn't think they were as pronounced as in the aroma and certain not nearly as much as in Flashback. The malt sweetness and hop bitterness almost completely balance each other out. 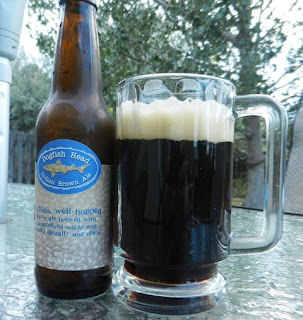 It is so delicious.

It is a medium to full bodied beer and the head retention is excellent.

Did I mention that I like this beer. It is a great one.

Personally, I think it deserves to be higher than #34 on the 2011 list and I am very surprised that it did not make it on the 2012 list. If I remember to vote again this year, Indian Brown Ale will almost certainly be on my list.

Here ... listen to Sam talk about his beer:

In case you are interested (and at least one of you are ... I got a question on facebook), here are the ones still left on my 2011 "not tried list":