On Friday I got a "Contact Us" email from a new fan of the blog inviting me over for his second ever home brew-day. Well, he did not ACTUALLY say he was a fan of the blog, I made that assumption because he did not say anything negative. That, and I am a complete legend in my own mind. Everyone who read the blog must be a fan. Right?

Getting that email reminded me that I have not brewed in a long time. It happens some times. Things get busy and you just don't get a chance to brew.

I knew that I would have a challenge getting time this weekend as well, but I came up with a scheme (sounded good at the time) that I could wake up at 4 and get a whole all-grain brew day before 10.

My family had a movie we had to go to which started at 10.

That plan was conservative enough that I had plenty of slack. Easy.

So, on my way home from work, I stopped by one of my local homebrew supply shops, and purchased the grains and yeast needed for Ello Poppet Czech Pilsner. I had the hops already in my freezer at home.

I had trouble getting to sleep Friday night and didn't actually wake up until 5:30 ish. For some reason, I convinced myself that I could still do it. I decided to go for it. Not only did I make beer, but my son and I also worked in making Root Beer at the same time.

I am wishing that I would have written down all the times so I could give a more exact chronicle of  how it went, but I did have the beer in the carboy before 9:30 and we did make it to our movie.

Some things that helped out ....

Brewing beer is one of those things that takes a long time to do, but there are long periods of time where you as the brewer have to wait for a process to complete. My son and I worked on the Root Beer together toward the end of the mash and during the boil. It also helps that he is pretty good at following directions, so I didn't have to hold his hand all the way through.

If you want to make your own Root Beer, or if you are just curious ... our kit came from Mr. Root Beer. It is extremely easy to make and if you like real root beer, it is fantastic. You can follow the link to order online. 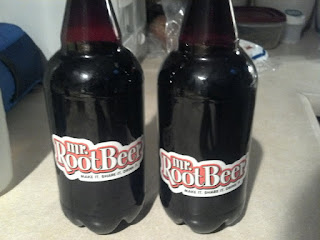 We had some of the Mr. Root Beer tonight, sharing it with some visiting family. It was really really good.

The Ello Poppet Czech Pilsner is currently fermenting away in the mid-50's. I am have the carboy in the Gott cooler (also known as my mash tun) in cold water for temperature control. I add some ice once and twice a day and so far it has stayed right where it needs to be for a lager fermentation. We will see how long I can maintain that.