Brewing up some Boo Berry Wheat

Before the weekend, I actually had not been planning on brewing. However, as I mentioned,  I killed the keg of She Who Must Be Obeyed Wheat. This left the beer choices for the Beer Model sort of limited in the SheppyBrew Brewery. Apparently, I've been giving away too much beer lately. My keg of Sloth Man English Mild is also getting low.

So, anyway, Saturday I decided to go to my Local Homebrew Shop and buy ingredients to make Boo Berry American Wheat. The Beer Model wanted to go too, so we packed ourselves and the Brewing Assistants (aka our kids) into the mini van and headed over to the shop. This is the shop that is closer to my home. I usually get my grains from the Homebrew Shop that is closer to my place of work, so I am not quite as familiar with the layout of this one.

The kids .... er ... I mean the Brewing Assistants helped me find and scoop grain. They also helped me decide which wheat malt and 2 row malt to use. It was sort of fun for them apparently. They actually had a little argument over who was scooping more of the grain. Sometimes those kids fight over the stupidest things. 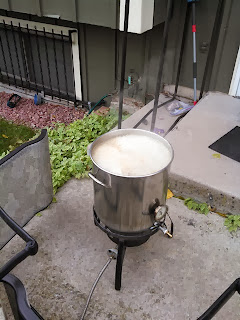 Anyway, eventually we got everything home and I brewed on Sunday morning.

The brew day was real smooth. I got started real early. I got the mash temperature right where I wanted it faster than usual. I got the right amount of wort collected with the right pre-boil gravity before I had to leave for church, and I started the boil after I got home.

It was pretty windy, but I was able to use our patio chairs as wind blocks, and so the boil went well.

It was pretty cool weather, so the chilling of the wort went a bit faster than usual. Everything went as expected. 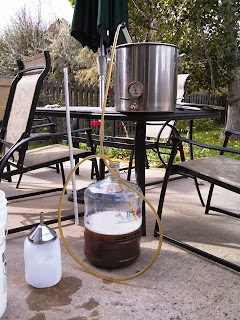 This time, I changed things up a bit from last time I made this beer. Last time, I added 2 15oz cans of blueberries in the secondary.  I thought the blueberry flavor was a little light last year until I added blueberry extract to the keg. So, this time I decided to add an additional 15oz can into the fermentor. The 50% more blueberry might mean I don't have to add the extract flavoring. We'll see. 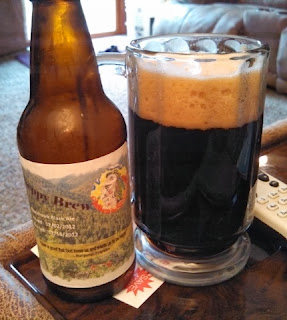 After brewing, I watched some football, but I really wasn't interested in any of the games until Sunday night. I did end up drinking a couple older SheppyBrew beers, though. I had some my world-famous BlackHawk Black , which was bottled last December. It still tastes great. I also had a bottle of Khazad-dûm Black Lager, which was bottled in March. I think this tastes better than ever. 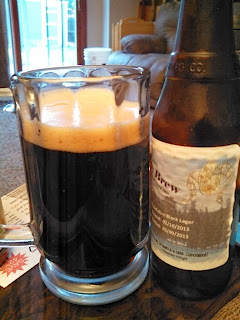 Ideally, had I planned things better, the Boo Berry would be done by Halloween, but it does not look like that is going to happen. I might be able to have it kegged by then, but it is almost impossible that it could be fully carbonated by then. Oh well, the Beer Model will just have to drink something else.
Posted by ESheppy at 10/22/2013 06:39:00 AM