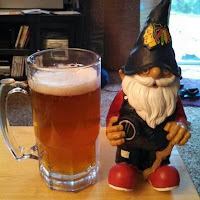 Last night, I killed the keg of She Who Must Be Obeyed Wheat. It sort of surprised me as it didn't seem that it had been around very long. As I look back at the bottling date, though, it was in existence for almost a month and a half.

This was a beer that both the Beer Model and I liked. It was sort of Buckwheat's BPA meets Summer Lovin' Wheat. The flavor profile was really unique. It's ester profile along with the malt bill came across a bit nutty. I actually tasted a nice bit of almond, which to me was really pleasant. When both the Beer Model and I like a beer, it generally doesn't last that long, so it should not surprise me that the keg died last night.

I am absolutely going to have to brew this one again.


This morning, I kegged my newest beer in my SheppyBrew Styles project, Weizened Doonkle. You may remember I brewed and blogged about it less than a couple weeks ago. Weizened Doonkle was designed to be a Dunkelweizen to satisfy my requirement for a Category 15:  German Wheat and Rye Beer. When I went to get ingredients, my Home Brew Shop didn't have any German Wheat yeasts, so I ended up grabbing White Labs #WLP320, which is called "American Hefeweizen Ale". This yeast says it produces a "slight amount of the banana and clove notes". This is actually better for me since I am not a fan of too much of that Hefeweizen Banana and Clove and Bubblegum flavor.

Today was the first time I tasted the beer since it went into the fermentor. The beer really has almost none of the clove and very little of the banana. I would call this more of a Dunkle than a Weizen. As I said, this is ok for me. Since I have to drink most of it, it makes sense for the beer to be something I would enjoy drinking. It would probably do badly in competition, though, because it lacks those traditional German Weizen flavors and aroma.

It might be a stretch to say I've brewed this style. 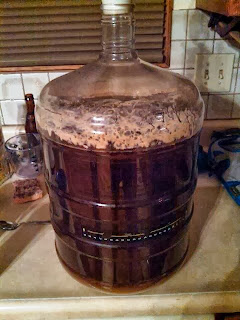 But, I am going to go ahead and give myself credit for this category. It is a wheat beer with lots of German ingredients despite the fact that the yeast didn't come out like most German Weizens. Maybe I'll brew this style again with a more traditional German Weizen yeast.

My youngest son wanted me to put some of his artwork on this bottle label. He drew a beetle not too long ago, and even had a tee-shirt made with the art. I am calling it his Doonkle Bug. Eventually, of course, I'll post the final label, but for now you can see the part that he contributed: 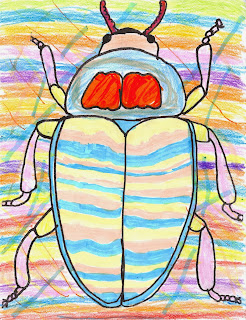 I bottled 6 12 oz bottles and kegged the rest. I'll probably start drinking from the keg next weekend, and I'll probably end up giving away the 6 bottles.