Well, you know I've been working on this SheppyBrew Styles project, right? At the beginning of the year, I decided I was going to try to brew beers in all the BJCP Categories that I had not brewed before. If you follow this blog regularly at all, you know I am close to getting this done.

Sunday was time brew something in 15. German Wheat and Rye Beer. The problem with this particular category is that I am generally not a fan of the German Wheat and Rye Beers that I have had. I've had some HefeWeizens that have been good, but usually they have too much of the phenolic clove flavor for me. I've had one or two Roggenbiers, and really didn't like them enough to want to have to drink 5 gallons of that.

I don't think I've even ever had a Dunkelweizen or a Weizenbock. Just bringing myself to brew something I was unfamiliar with was a bit scarey. 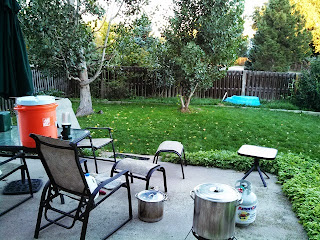 I decided, though, that based on the BJCP description, I would be best off going with one of the darker styles. If I got too much yeast character, I figured the extra rich caramel and/or melanoidin flavors (which I have decided to refer to as "Dunkleness" would temper some of the phenols. I decided to go with a Dunkelweizen.

Plus, I have a co-worker who asks me from time to time if I've ever brewed a Dunkelweizen. He was stationed in Germany long ago, and loved that styel of beer. I figure if I don't like it, I can dump some off on him. 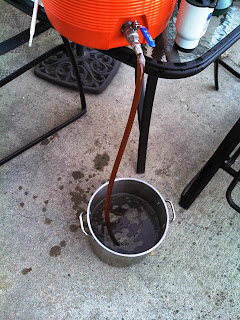 As I usually do with beer styles I have never brewed, I started with Jamil's Dunkelweizen recipe in Brewing Classic Styles, modifying it to match what is locally available to me and what I know I like. The recipe I came up with is on the SheppyBrew website, called:

Brew day was exceptionally smooth. I got started around 6 AM, and I had very little problem getting to the the right mash temperature.

My pre-boil gravity was high, so I ended up adding water during the boil to dilute it down a bit.

The only hops I added were first wort hops, so I didn't even have to add anything into the boil until about 10 minutes left when I added yeast nutrient. As this is a wheat beer, I didn't add any Irish Moss or Whirlfloc like I usually do. 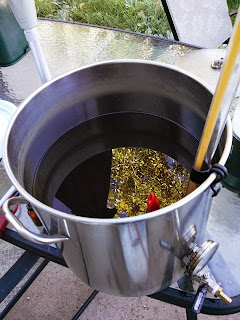 I got the wort chilled to 75ish, transferred to the carboy, and had that sitting in an ice bath by the time I had to go to church. By the time I got home the wort was right at about 60 degrees, perfect pitching temperature. 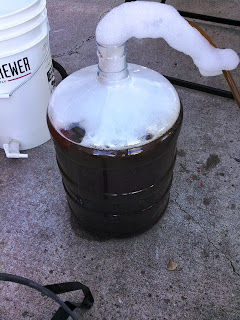 I ended up with a very full carboy with 1.052 OG wort. The wort tasted wonderful. It was a bit lighter in color than I intended, but still in style and the flavor seemed to be the right amount of "Dunkleness". 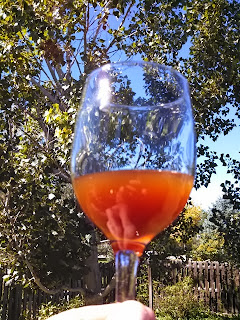 Now, I will let it ferment and we will see how it turns out.

With this style under my belt, I now only have two more styles I need to brew. I need to do a Porter for Category 12 and a Strong Ale (probably a barleywine) for Category 19. With almost 3 full months left in the year, that should be really easy to finish.

As always, if you have a question, comment, or concern of any kind, feel free to leave a comment below.