Remember that I am not allowed to use electronics on Sundays during Lent? If not, you feel free to refresh your memory by looking at Lent 2014. Other than not having any brew-day pictures that I would have posted to the SheppyBrew Facebook Page and that I could have put on this page, turns out I didn't really need  electronics to brew.

The beer that I brewed is T.R.A.S.H. Mexican Lager. There is a bit of a story behind the name, which is on the SheppyBrew Website, and I won't repeat here. If you want to know the story and/or see the recipe, go check it out:


I didn't get started as early as most brew days, but did get things started before church.

My strike water temperature started out a little high. Usually, I would have used my handy-dandy Beer Smith Lite phone app to calculate how much water to add to bring it down. This time, though, I estimated. My estimation turned out perfect, and the mash started out right at 148 (exactly what my recipe planned for).

It was a long mash as I left with the family to go to church.

When I got back, I sparged and collected the wort. The pre-boil gravity was right on.

The boil went as planned. The gravity was a few points at the end, but I simply added about half a gallon to the wort, bringing it right to 1.049 (again without using my phone's calculator for the exactly volume).

After the boil, I cooled the wort into the 60s with a wort chiller and then racked the it into my smaller carboy. I placed the smaller carboy into a gott cooler with ice for an hour or so, which brought the wort down below 50.

Then, I racked that into my bigger carboy, leaving behind a bit more brewing "gunk", and ended up with a little more than 5 gallons at about 48 degrees into which I pitched my starter of  White Labs #WLP940, Mexican Lager Yeast. 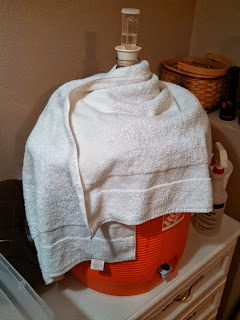 I  have been fermenting the beer inside a gott cooler filled with water. I've added enough ice to keep the temperature in lager ranges. Even starting out lower than 50, the fermentation took off in way less than 12 hours and has been pretty steady.

Last night, I actually took the carboy out of the water to let the beer warm up to ale temperatures for about a week. I know traditional lager brewers will probably gasp in shock and horror that I would do such a thing, but it is the SheppyBrew process for fermenting lagers. I keep it cold for the first week or so and then let it heat up to clean up any yeast by-products. It may not be "traditional", but I have won a first-place on a lager using this method, so I think it does ok.

Anyway ... I'll let this beer sit a few days and take a gravity reading. If you follow the SheppyBrew Facebook page, you'll probably see updates on how it turns out.