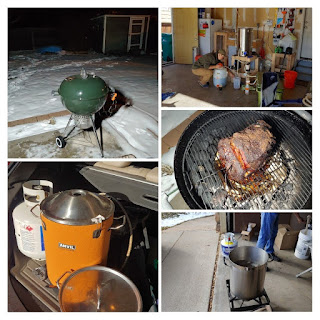 So ... Saturday was Learn to Homebrew Day.

We used this as an excuse to get a brew day done together with a couple of my Home-brewer friends.

At the same time, we invited a bunch of non-homebrewers over to watch and hang out. Sort of like Big Brew Day back in May.

This time, the Brew Day was at my friend "Du"'s brewery.

Less people showed up to this brew day than BBD, but the brewers sure had a lot of fun.

During the Big Brew Day back in May, my friend "Doc" brewed an extract batch. And, I decided that I would do the same thing this time.

It also makes the brew day take less time and therefore make the chance of forgetting something in the process less likely.

Most importantly, it means I had less clean-up after the brew day.

So ... I created a quick little extract Irish Red Recipe: 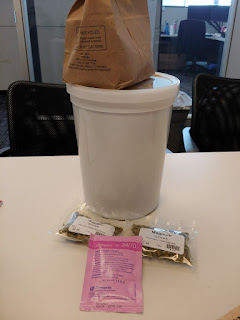 In case you're wondering about the name ... "Dearg" is what google translate tells me is word "Red" in Irish.

So essentially, by beer's name is Irish Red Irish Red. Not that great a name, and I'm not even real sure how to pronounce it ... but whatever.

I actually used the Online Order system at The Brew Hut this time to get my ingredients. Since I'm close, I went to the shop to pick it up rather than having it shipped.

The manager of theThe Brew Hut, "Jeff" expressed surprise and shock that I was the one who made this order. He's never seen me pick up extract.

He did think my reasoning around why I was doing it was solid. He gave me a few business cards to pass out. As it turns out ... there wasn't anyone who showed up who wasn't already very familiar with the shop .. so that was a bit of a waste. The night before, I smoked a pork butt to bring. We didn't end up eating it at the brew day, but it was there in case. Du made fantastic ribs and yummy chili. Since the group was much smaller than the invite list, we had plenty to eat without my contribution.

And ... it meant I didn't have to make anything else for family dinner that night. 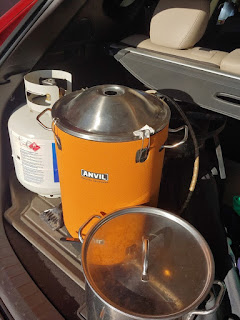 Even though I needed less stuff, I forget some things. Not a big deal.

Doc and I arrived at 10AM. Du had started at 6AM and was about done by the time we got there. 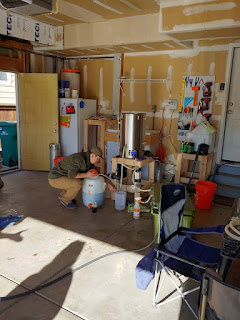 So, while Doc and I were getting going, Du was finishing up and playing host.

This time, Doc did an all-grain Irish Red. Somehow, I didn't finish that far ahead of him.

As always, it was difficult to concentrate on getting the brew day done. Something about people (and beer) distracting me always makes it more difficult. 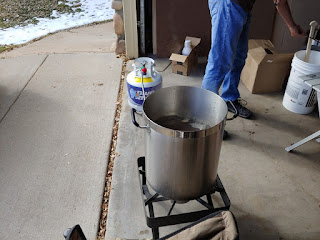 We were all pretty much done by 2pm and headed home shortly after that.

It did seem to go quicker than most of my traveling brew days. I did make at least one mistake that might come back and bite me. I have not decided if I'll share what that was. Maybe later.

At this time, my beer is fermenting away. It is using a lager yeast, and I did start it at lager temperatures for the first couple days, but I gave up on keeping ice supplied by Monday.

Sort of my typical "fast lager".

I expect that I'll keg this up in a couple of weeks.

Not sure when we'll do another traveling brew day, but it sounds like next time is at "Doc's" brewery.

As always, you can keep an eye on the regular SheppyBrew Channels to see what is happening with beer and other things: SheppyBrew's Facebook Page; Sheppy's Twitter Feed;SheppyBrew's Instagram Page; and SheppyBrew's Website. Of course, don't forget to visit this blog often as well!
Posted by ESheppy at 11/05/2019 06:32:00 PM