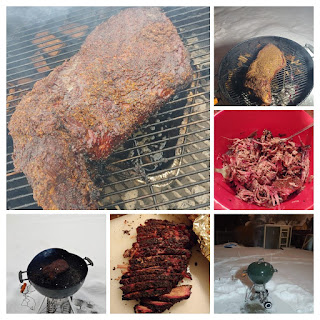 I made my third brisket a couple weekends ago.

My first brisket was about 10 pounds choice and turned out really good.

The second one was almost 13 pounds prime and turned out better.

This third one was my best so far. I appear to be getting better at this, although I'm not sure what I'm doing differently each time.

This one was about 12 pounds when I bought it from Sam's Club, and I went with a prime cut again.

To be honest, 10 to 11 pounds is really about as big as I think fits on the smoker, and I think this would have been even better if I were able to find a 10 pound brisket.

But, it is hard to find one under 15 pounds at my Sam's club. Especially when the price per pound is reasonable. 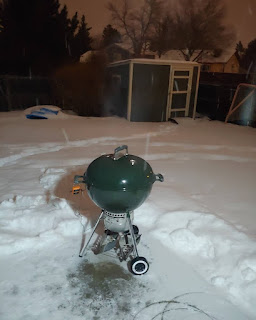 I got up around 3AM on a snowy Sunday morning to start to prepare the brisket and the kettle for the cook.

Basically, I taste what is in the jar, decide what it needs added and then add until I think it is about right. 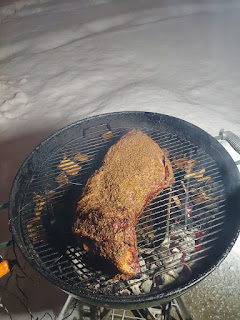 As usual for big cuts of meat on my kettle, I constructed a "snake" out of the charcoal. I used hickory chunks.

NOTE to self ... I need more hickory chunks.

I started my charcoal and got the brisket on the smoker by 3:40AM. 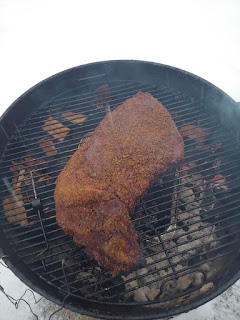 I never know where to put the temperature probe in brisket. At first, I had it in the flat, but I moved it to the point at some point. 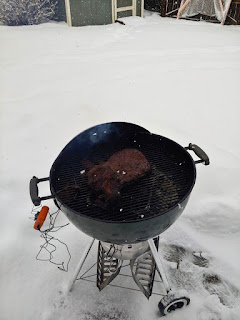 Around 10, the temperature probe read 183. I liked the color, so I wrapped the brisket to finish off.

After wrapping, I let the kettle temperature get above 300.

Then I let it cook. Over the next couple of hours, I probed the brisket a couple times to gauge the tenderness. 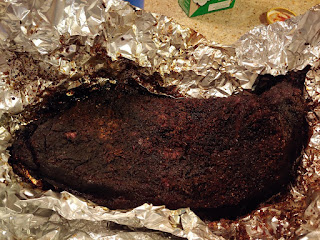 It wasn't until about 2PM that I felt like the tenderness was where I wanted it, and I pulled it from the grill.

I let it rest in a cooler wrapped in foil and towels until it was time to start thinking about dinner time. Around 5:45, I sliced the flat and shredded the point. 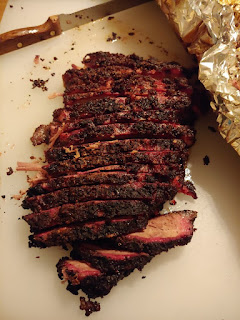 My oldest son and I had sandwiches. My youngest son just had the shredded beef plain. My wife likes the flat better and had that. 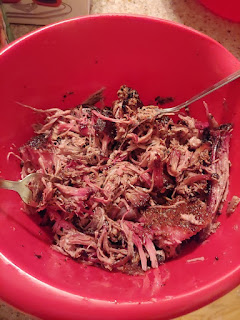 And it was awesome. I do think this was my best brisket so far.

I do think I'd like either a bigger kettle or find slightly smaller briskets. With the size of this one and the last one, part of the cook has the tips of the flat and point over direct fire and there is a bit more charring than I would consider perfect.

But, at the same time, that adds some character that maybe I'd miss if it were not there.

The other thing that bothers me is that I can't seem to figure out how time the brisket to come off closer to dinner time. I would rather it only sit in the cooler for an hour or two.

Again, maybe that is for the best. I'd rather have it done way early than have to wait to eat.

So, I'm really pleased with my ability to cook delicious briskets. I no longer fear making them. I love to have them for dinner, and I really like having meat left over for lunches.

My wife also always gets a couple of great meals during the week made out of the brisket meat.

Beef stroganoff made with leftover smoked brisket is AWESOME.

Anyway ... I'm sure I'll share more brisket cooks in the future, and certainly other BBQ adventures.

As always, you can keep an eye on the regular SheppyBrew Channels to see what is happening with beer and other things: SheppyBrew's Facebook Page; Sheppy's Twitter Feed;SheppyBrew's Instagram Page; and SheppyBrew's Website. Of course, don't forget to visit this blog often as well!
Posted by ESheppy at 2/17/2020 09:14:00 AM