16 lb Brisket on the Kettle 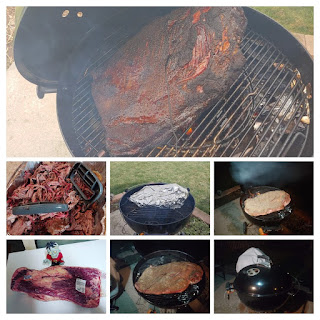 Well ... as I mentioned recently, I Bought Another Weber Kettle.

One of the reasons that I Bought Another Weber Kettle is that I wanted a bigger kettle on which to smoke bigger briskets.

For a month or two, every time I go into my Sam's Club (which is where I get most of my bigger cuts of meat to smoke), the meat department is pretty empty.

So, it has been awhile since I've seen a brisket to smoke.

Last week, I discovered that Sam's was now allowing briskets to be added to the online-order to pick up at the store.

So, I included a Prime Brisket to an order. To be honest, I wasn't sure I'd actually get one until I came pick it up.

But, sure enough .... when I picked up my order, included was a 16 pound USDA Prime Brisket. 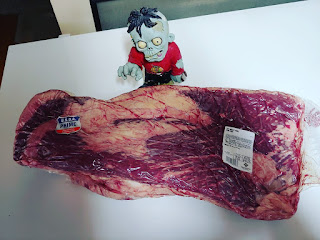 This is the 4th brisket I've cooked, and by far the biggest.

I also think it was my best, although the last one was pretty fantastic too. 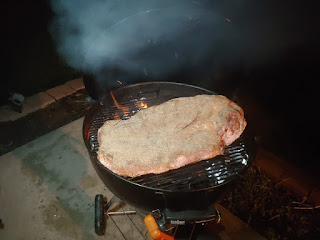 Late afternoon on Saturday, I set up a snake on my newer, bigger kettle.

Early in the morning, I got up to start preparing the brisket to be cooked. I was up around 3AM, and I started by trimming quite a bit of the fat cap off the meat. Then, I applied my homemade "SheppyBrew" rub. 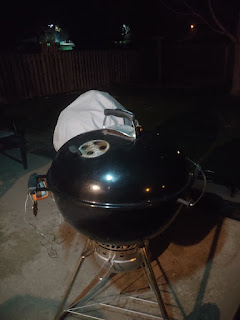 Around 3:30, I started some charcoal in my chimney starter. I added the lit charcoal to the beginning of the "snake" by 3:40. My brisket was on the smoker by 3:45.

Then, I let it cook for a couple hours before looking at it again. 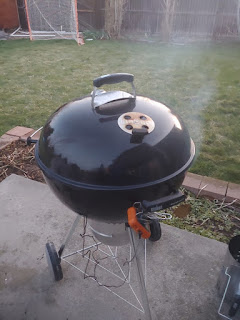 The sun was almost up when I snapped another picture and sprayed some kombucha on the meat. At this point, the internal temperature had risen from around 34 degrees to about 81 degrees.

As you can probably tell from the pictures, a 16 pound brisket barely fits on a 26 inch Weber Kettle. 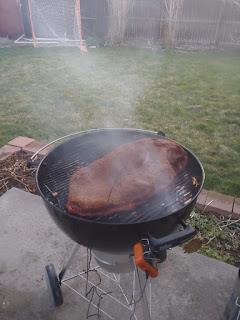 But, it cooked very nicely. I placed aluminum foil over the parts of the charcoal under actual meat so that the drippings would not go straight into the fire. This worked pretty well. 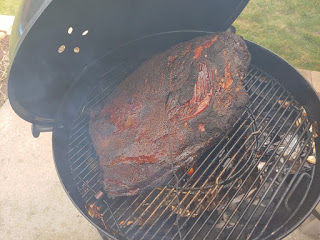 At 10:30, the charcoal was about half gone. The Internal temperature was 170. I decided to wrap in aluminum foil.

At that time, I added a little more charcoal and then let it go for another few hours. I did get a bike ride in at about 11:00.

When I returned from the bike ride around noon, the temperature was at 194, which is pretty close to being done. 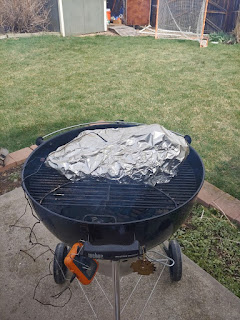 I let it go another hour and probed for tenderness. The point was very tender. The flat still felt like it needed more time.

Around 2:00 pm, I thought the flat felt tender enough to call it done, so I took it off the kettle and put it into a cooler for about 3.5 hours. 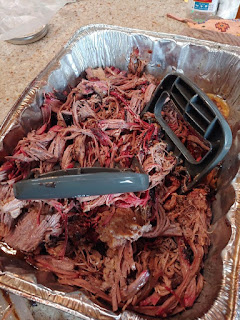 The whole thing was tender, juicy, and delicious. The hickory smoke flavor was great, and the rub was awesome.

As I mentioned earlier, this was my best brisket so far. 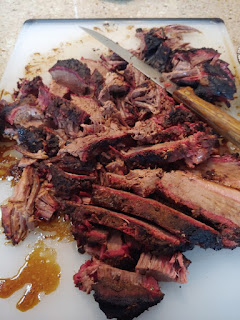 Obviously, a 16 pound brisket is too much for a family of 4 to eat in one sitting. We have left-overs.

Sometimes, I think I like the leftovers better than the actual meal.

I am extremely pleased with the results. Obviously, I'll do this again.