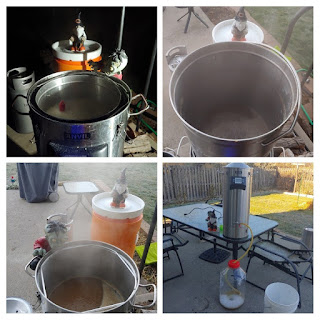 Puppy. Monkey. Baby. PuppyMonkeyBaby.
There was an incredibly stupid commercial during Superbowl 50. (Go Broncos!)
Puppy. Monkey. Baby. PuppyMonkeyBaby.
The commercial was for some sort of weird Mountain Dew flavor. Not something I ever tried. I am fairly certain I'm not missing anything.
I keep a list of potential beer names on my phone, and for some reason, at some point (I assume during or shortly after the Superbowl), I added "Puppy Monkey Baby" to my list of names.
A couple weeks ago, I decided that my next beer would be a low alcohol American Blonde ale, and I as I was trying to decide on a name, "Puppy Monkey Baby" jumped out at me.
I honestly don't know why. It is a stupid beer name. But, it does amuse me. I guess that is reason enough to choose a name.
I brewed it last Sunday on my Anvil Foundry.
Puppy Monkey Baby Blonde Ale 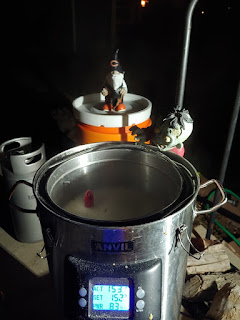 This was my fourth batch on the Foundry, and I'm still getting used to it.
I did add the water to the Foundry on Saturday night and set a timer to start heating the strike water. I love that feature.
I ended up getting up earlier than I thought I would, and still had to wait some for the water to get to strike temperature, but that still saved me some time I would have spent getting all that ready had I not set it up the night before. 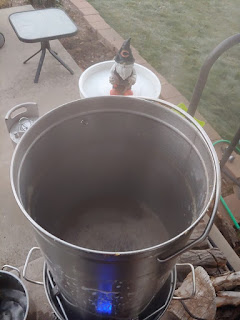 I got the mash started a little before 5:20, which is about the same time I got Irregular Eric's started the week before.
My mash efficiency was much better this week than last week. I think that is mostly because this was a much smaller ABV beer than Irregular Eric's. I even diluted a little to get to my expected pre-boil gravity.
I was experimenting with sort of a manual recirculation / vorlauf by draining water out of the spigot and then pouring it back into the top.
This seems to help with clarity, but then I disturbed the grain bed while pulling out the grain sleeve, and I still ended up with cloudy wort in the boil. 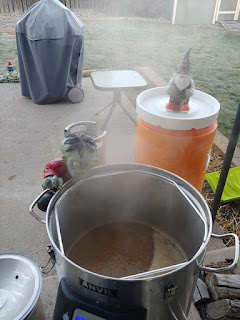 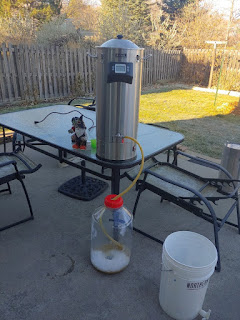 In previous Foundry batches, I've mentioned that I cannot use my Hydra chiller because it was too big a diameter for the Foundry, but I saw others on forums had made it fit, but I decided to give it another try.
It fits. It actually seems to work pretty well. So that's cool (pun intended).
I was able to chill to 56ish degrees without using a pond pump. That was cool too (pun intended).
The yeast was pitched and the fermentor downstairs by 9ish. I had things pretty much cleaned up by 9:40.
This is a slightly faster brew day than last time. 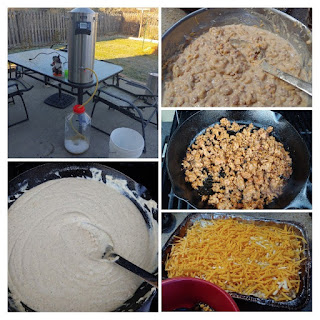 The beer was actively fermenting by the next morning.
After brew day, I made some Smoked Mac & Cheese for dinner. My son is home from college and requested it.
It turned out awesome. 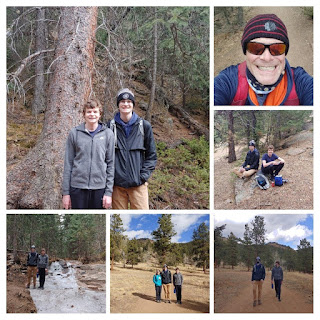 I expect the beer will be kegged sometime next week. I'll let you know how it turns out.
As always, stay tuned on the regular SheppyBrew Channels to see what is happening with beer and other things: SheppyBrew's Facebook Page; Sheppy's Twitter Feed; SheppyBrew's Instagram Page; and SheppyBrew's Website.