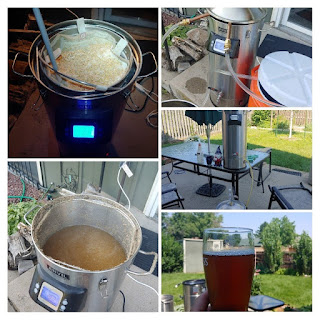 I brewed Sunday.
If my accounting is accurate, this was the 292nd batch of beer I've brewed in my "career".
It was SheppyBrew's 16th batch of 2021, and our 21st batch done in the Anvil Foundry.
This is actually the 4th time I've made this recipe.
T.Ra.Sh. Light Mexican Lager
T.Ra.Sh. Light isn't really a "typical" Mexican Adjunct beer like Corona or Dos Equis. It actually is all-malt ... mostly Vienna with some pilsner mixed in.
As a result, it isn't as pale or thin as the prototypical "Mexican Lager". It also has a bit more noble hop flavor in the finish than you'd associate with the mass-produced versions.
It is something I really like to drink during hot summer days, though. And the "T.Ra.Sh" family seems to appreciate it. 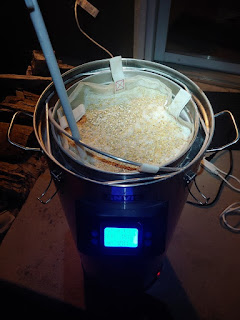 As usual. I got started the night before, getting the water with salts and acid ready to heat up while I was sleeping so that I could get started with the mash immediately when I got up the next day. 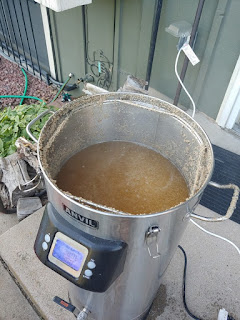 Everything went well. I mashed a little longer than usual. Over the past couple of batches, I've been "squeezing" the grain to push out some more liquid, and this seems to pick up my brew house efficiency a bit.
My pre-boil gravity was high, so I diluted with a bit of water.
I left the lid on the kettle a little too long and a bit of a mess was created as there was a bit of a boil-over, but not too bad. 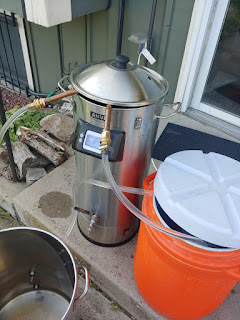 Other than that, the boil went as expected.
Cooling took a bit longer than my past few batches. The heat of the summer seems to be taking affect. 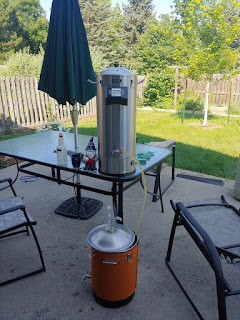 But, the beer was in the fermentor at 57 degrees and after a few hours with the Anvil cooling system on, I pitched the yeast at 52 degrees.
The fermentation was going the next day. As is usual for my lager fermentations, I am fermenting in the 50's for the first week and then let the fermentation rise to ambient temperatures to finish up. 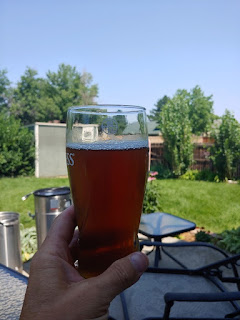 I'm really looking forward to having this on tap.