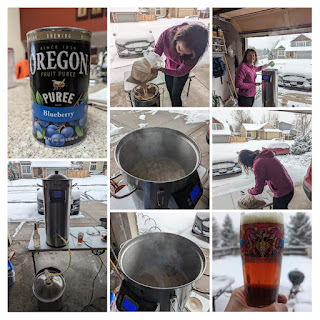 My wife (aka the SheppyBrew Beer Model) brewed with me Sunday.
We'll brew together from time to time. Sometimes I say I do it so that I'll have a second adult brewer in the household, making it legal for me to brew more than the 100 gallons per year.
Honestly, though, I'm quite certain no one pays that close attention to the homebrewing law, and I don't really have to establish her as a brewer to be ok with the law.
The real reason is that it is fun to pretend that she's in charge of brewing.
I'm not sure why she does it. Apparently she thinks it is fun to brew with me from time to time as well.
Sunday, we brewed one of her favorite recipes ...
Boo Berry American Wheat 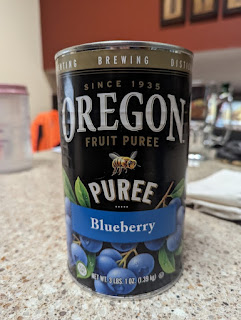 For what it is worth, this is SheppyBrew's 4th batch of the year. If I'm accuately keeping track, this is the 5th time we've brewed this beer. It is the 307th batch of beer SheppyBrew has brewed in its history as a homebrewery. 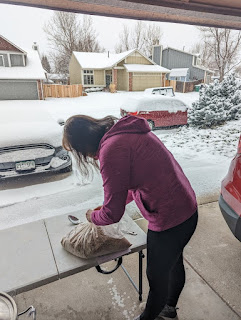 We get started later in the day when the Beer Model brews, and Sunday was no exception.
It was a snowy day, and we brewed in the garage. I did prepare the water the night before, so the strike water was ready to when she was up and ready to brew. 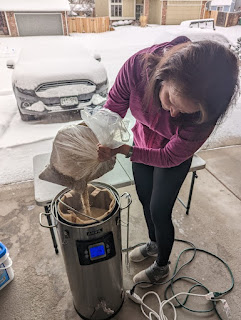 While brewing, I also put a chuck roast on the weber kettle. The Beer Model doesn't ever really help with BBQ. 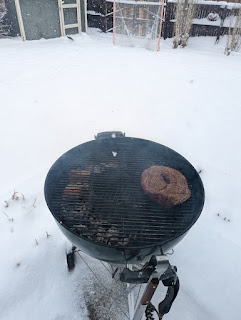 But, anyway, we did the mash together. 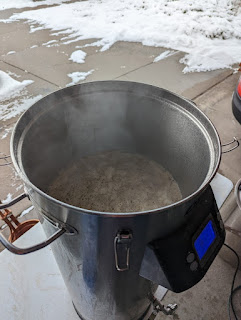 She kept track of the boil and adding ingredients as the it went along. 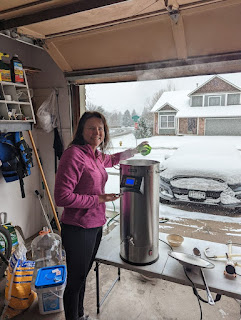 I continued to watch the chuck roast through out the morning. At around 11:30 or so, I moved the roast into a crock pot so I wouldn't have to keep watching it. 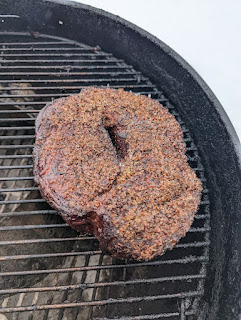 We tried the Colorado Vienna Lager. 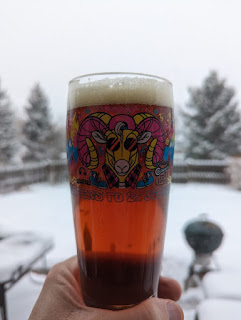 It was a little after noon when I racked the wort into the fermentor, and pitched the yeast. We added the blueberries right into primary fermentation. 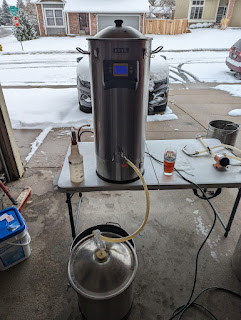 The rest of the day was spent watching basketball and some hockey.
We had the chuck roast for dinner as shredded beef sandwiches. 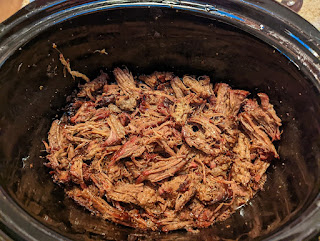 Fermentation started sometime overnight, and was going pretty strong by mid-morning Monday.
I think I'll probably keg this up some time next week.
Currently, I have two empty kegs, so I might brew again next weekend to catch up on my inventory a bit.
I guess we'll see.
As always ... don't forget to stay tuned on the regular SheppyBrew Channels to see what is happening with beer and other things: SheppyBrew's Facebook Page; Sheppy's Twitter Feed; SheppyBrew's Instagram Page; and SheppyBrew's Website.Of course, don't forget to visit this blog often as well!
Go Blackhawks!
Posted by ESheppy at 3/08/2022 06:24:00 AM