It is rare that I get to cook during the work-week. Even more rare to do a long BBQ / Smoke.
Due to the covid shutdowns, I now work at home, so there is really no reason not to do long cooks like Pork Butt and Brisket. We just mostly think of those as weekend meals.
Anyway ...
This past week, my nephew, AKD Bluefield (my sister's son), was on a post-college road-trip with 3 of his friends and stayed with us a couple of nights.
My wife worked on Tuesday, and we thought we should feed AKD and his friends. I decided to smoke a pork butt for dinner so she wouldn't have get home and try to get something cooked for a larger-than-normal group. 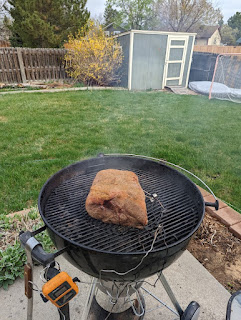 I seasoned the butt Monday night with the intention of getting it on the kettle early morning.
I sort of forgot until around 8 AM, which is later than I usually start smoking pork shoulders, but is still plenty of time for me to finish one before our normal dinner time.
I did keep the kettle a little hotter than my usual cooking temperature just to make sure it was done in time for dinner. 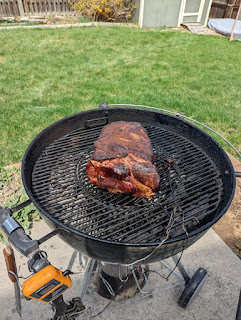 I simply set up a "snake", lit enough coals to get started and placed the butt on the kettle.
Since I was working, I checked in less than I would usually. I did have my wireless temperature probe in so I could monitor the "oven temp" and the internal temp.
Usually, when I smoke a pork shoulder, I'll spray it every hour or so for the first few hours with kombucha. This time I skipped that. It honestly didn't seem to affect the final product at all, so maybe I'll just stop doing that.
There were no issues. 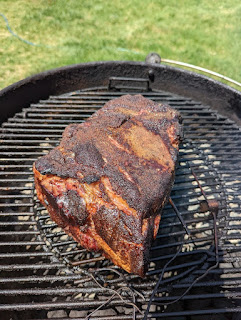 Around 12:45, the internal temperature read 165ish. At that point, I pulled the butt off and wrapped it in foil to finish.
I apparently planned the amount of charcoal just about perfect, because by the time the meat was at 202, the snake was about done and the kettle temperature was starting to fall a bit.
Just in time for me to pull the pork off and place it in the cooler. I just let it sit from about 4:40pm until just before we were ready to eat.
AKD and friends returned from their adventures at a perfect time. And we had pork sandwiches for supper.
I warmed up some of my homemade BBQ sauce for people to put on their sandwiches too.
The pork turned out perfect. Everyone enjoyed the food. One of the friends even told me that his was the best pork sandwich he'd ever had.
It made me pretty happy.
I may do these mid-week pork butts more often. Cooking during work is sort of fun. The forgiving nature of a pork shoulder means I don't have to baby-sit the cook.
Plus, going outside to check on the cook from time to time ... and getting the beautiful aroma of cooking pork and hickory smoke is a joy I don't usually get during a work week.
Yum!
Posted by ESheppy at 5/07/2022 08:59:00 AM