It isn't my usual liquid store.  I have not been to this one in awhile (since 87,000 square foot Tispy's Liquor World opened up near me).  I was pleasantly surprised to see a bottle (literally one pint sized bottle) of Pliny the Elder.

You may recall (or more likely you might not) that a month or two ago (almost exactly two months), I wrote that the AHA had posted their 2010 Zymurgy Best Beers In America Poll. I was somewhat ashamed that I have had so few of the top 50 beers.  I had only had two of the top 10 and 8 of the top 50.  A couple days later, I posted that I had picked up Arrogant Bastard and Dogfish Head's 90 minute IPA.

You can read my blog posts on the subject here ... and here.

Pliny the Elder, was #1 on the list.  I had to have it, but Tispy's Liquor World didn't have it, so I figured I would just wait for them to get it.  I even asked the beer manager of the store to call me when it came in.  I never got a call, so I assume Tipsy's has not gotten it in yet.  I was actually very surprised that Arrow Liquormart had it.

So, today, I tasted Pliny the Elder, the best beer in America. 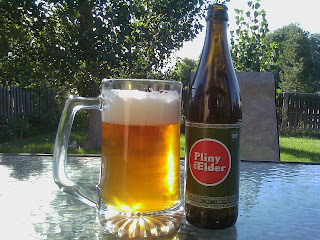 You probably already know this, but Pliny the Elder is a double IPA made by Russian River Brewing company in Santa Rosa, CA.  It is very light in color and mouth-feel.  It is clear, and dry, and crisp, and extremely hoppy.  It is so easy drinking that you want to have more than you probably should (8% alcohol).  It is exactly what a double IPA should be.

I do not think this is the best beer in America.

I gave my wife a taste, knowing what her reaction would be.  I even told her it was Pliny the Elder, and if she read my blog like she claims, she would know that Pliny the Elder is an IPA.  Tracy does not like IPA's.  So, she doesn't think this is the best beer in America either.

I do like IPAs and have had a bunch of them at brew pubs (mostly here in Colorado).  This ranks up with the best I've had, but I wouldn't mark it above Golden City Brewery's (2nd largest brewery in Golden, CO), or Dry Dock Brewing Company's, or even New Belgium's Ranger IPA.  That is not really a knock on Pliny ... it really isn't.... except this Pliny cost me much more than those other beers would.

Email ThisBlogThis!Share to TwitterShare to FacebookShare to Pinterest
Labels: Brewing, Me, Zymurgy BBIA