One of my very first beers was named Whisky Wife Wheat.  It turned out well.  It was a nice light American Wheat beer.

The next time I brewed it, I changed the recipe to make it more of a German Hefeweizen.  That beer turned out well too.

But, I got to thinking that really something named after my wife (Whisky Wife ... the Sheppy Brew beer model), should be a bit more Blue Moonish in its flavor character, so the 3rd time I made it, I used a Witbier yeast and some coriander and orange peel along with a healthy dose of flaked oats (oatmeal for most of you).  3rd time was a charm, because Whisky Wife Wheat II is absolutely worthy of the name.  Its silky smooth light slightly oat - wheat flavor with just enough orange coming through is really a nice summer, blue-moon-type beer.

Just because I had some Mr. Beer wheat ingredients, I made another Whisky Wife Wheat with the Witbier yeast and orange with corriander.  On this one, I over-did the orange peel, and it really does not have the nice smoothness that comes with the flaked oats, but it is still a nice light summer orange beer if you are in the right mood. 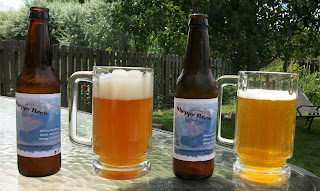