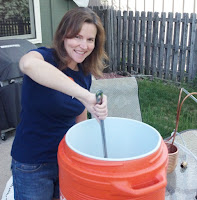 Yesterday, of course, was American Homebrewers Association's BIG BREW DAY. This has traditionally been an excuse to get the Beer Model brewing. Coincidentally, this was also a weekend that our kids were spending with the family we trade weekends with.

If you followed the link to the recipe (Laser Salt Sandy Blonde Ale), you might have noticed that we decided to do a double infusion mash rather than my usual single infusion. I measured out the water for the protein rest and think I made a rookie mistake. The recipe calls for a 12 quart protein rest, which is 3 gallons. I think I used 4 gallons. It was not until later when I noticed we had an exceptionally full mash tun that I figured out that I must have made this mistake.

Anyway, extra water does not really hurt anything. We ended up with more wort into the boil kettle than we were expecting, but by increasing the boil time by half an hour, we concentrated that down to a proper density.

During the "rest" times in the mash, and during part of the boil, we did some yard work. It was a real nice day here in Denver. Already pretty hot for this time of year, but still a beautiful spring day.


As you may remember from Friday's post on this blog, I had wanted to experiment with "Clarity-Ferm" in this beer. Just as a reminder, White Labs "Clarity-Ferm" is a enzyme product designed to help clarify beer by breaking down proteins. There has been a fair amount of discussion that Clarity-Ferm theoretically breaks down the gluten protein in barley enough to essentially make a beer gluten-free.

This has been a relatively recent development, and there has not really been very much research on this. Because of the lack of conclusive scientific study, the FDA doesn't give a beer a gluten-free tag if it relies on this enzyme to get rid of the gluten proteins. However, I have heard that in Europe this is an accepted way to make gluten-free beers.

Anyway, as I have discussed quite a few times on this blog, the matriarch of our kid-swaping partner family (referred to as "Gretchen" so as to protect her identity) has a sensitively to gluten. She is the one for whom I have made Free the Glutens! APA (FTG) a couple of times. She claims to really like FTG, but to me there is just something weird about the taste of it.

So, I have been looking for an excuse to make a beer using Clarity-Ferm for awhile now. And since the plan is to bring a keg of this beer camping to the Great Sand Dunes with a number of families including "Gretchen's", this was to be the beer for my Clarity-Ferm-Gluten-Free experiment.

So, after chilling the wort, and filling the carboy, the Beer Model and I took a trip to the North side of Denver and Stomp Them Grapes to pick up some Clarity-Ferm.

We also hit a couple of local breweries for little taster samples while out.

We got home around supper time, put the Clarity-Ferm and our yeast into the carboy, and shook it up. The beer is now fermenting away.

It ended up being a long brew-day, but I am sure the result will be worth it.