I have had some cans of Mr. Beer HME and UME (hopped malt extract and unhopped malt extract) for quite some time. In fact I am pretty sure I have not bought my own since Peter from Mr. Beer gave me some after the 2010 GABF. A couple of the "use by" dates on these cans are coming up.

So, today I had enough free time to whip up a batch of beer (a Mr. Beer batch, not a "real" batch) and decided to go ahead and use up these cans of extract.

It has been a LONG time since I've done a straight Mr. Beer batch of beer, but decided I didn't want to go through the effort of coming up with anything, so my recipe is simple.

For a 4.5 gallon batch:
I am calling the beer "Wetta Berry". It is sort of a combination of SheppyBrew's Wetta Blonde Ale and Girly Berry Blonde Ale. At least when I first thought of doing this today, I thought it would be. I was thinking that my Can Mr. Beer Cowboy Golden HME was a can Classic American Blonde Ale. I like the name enough that I am not going to change it just because one of my ingredients is off.

Don't tell anyone. No one will know the difference. 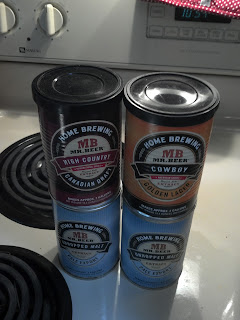