Watch this video of my wife sliding down a sand dune:


When my wife (aka the SheppyBrew Beer Model) saw this video she asked me, "how did you know I would scream?"

I just gave her a look and said "I just knew". We have been married a long time.

So, when we last left you in part 1 of Laser Salt and the Beer Model, We had to narrow down "not too hoppy and not too dark" to an actual style of beer. We needed to do this so that we could develop a recipe. We needed the recipe to buy ingredients. We need ingredients to brew the beer.

There were a couple more requirements.

We are going camping in June with a group of families to the Great Sand Dunes National Park. We would like to bring a keg of this beer down there to share with the adults in that group. This means that we needed to make something not too extreme so that non-craft-beer-drinkers would still maybe be able to enjoy it. In other words, it needed to be somewhat of a "gateway beer". Of course this isn't more helpful in narrowing the style down than "not too hoppy and not too dark". In fact, you might say this is another way to say "not too hoppy and not too dark".

We thought a session beer would be good on a group camping trip. We didn't want to get people too hung-over with high alcohol.

Because the beer needed to be done in early June, I didn't want to make a lager. Lagers generally take longer to brew, and we didn't have that kind of time. That narrows down the number of beers considerably.

Our gluten-sensitive friend "Gretchen" is going to be one of the campers, and I wanted to try "Clarity-Ferm" as a way to produces a gluten-reduce. If you've been following my discussions on this blog about Gluten Free brewing, you might have picked up that "Clarity-Ferm" by White Labs is an enzyme product used to help clarify beer. It has an interesting side effect in that it breaks down the gluten protein in barley. Theoretically, it breaks the protein down enough that the beer is essentially harmless to people who can't process gluten. There has not bee a lot of study, and the FDA will not let a brewer that uses this enzyme call a beer gluten-free. In Europe, though, my understanding is that brewers are allowed to make this designation.

Please note, if you are a home-brewing Celiac, PLEASE do your own homework on this. There is some conflicting information out there, and you should not trust my summation of it all. At the very least, there needs to be more study done.

Anyway, the whole Clarity-Ferm thing narrows down the possible recipe ingredients because the gluten protein in wheat is not broken down by this enzyme. So, I wanted to leave wheat out of the beer. 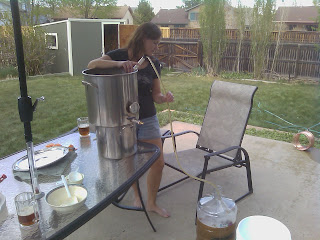 So, in summary, the beer had to be "not too hoppy and not too dark". It needed to be a sessionable ale. It could not be a wheat beer. We wanted it to be a new recipe.

At one point when the Beer Model was going through Brewing Classic Styles, one of the things that she thought was a possible choice was an Irish Red. Of course, my favorite Irish Red is Eric's Red. I only recently made this as an all-grain batch, and I really liked the base malt (Marris Otter) that I used. I decided that my base malt would be Marris Otter.

My Free the Glutens! APA uses Golden Naked Oats, which has been another ingredient that I wanted to try in another beer, so I decided to through that in too.

I decided that would be my malt bill. I went with 9 pounds base malt and 1 pound Naked Oats. That should come in below 5% ABV.

For hops, I went through my freezer and added up alpha acids until I got bittering pretty balanced. I had some Hallertauer that had been in there for awhile. I figured I would add that at the end to use it up. AND, just for the fun of it, I decided I would add in 1 ounce of crystal hops at the end of the boil.

Wednesday, I purchased the ingredients. My local home brew shop did not have Clarity-Ferm, so "Gretchen" might be out of luck. I also checked another who also did not have it. I have one more shop to check. I am not confident that I will be able to do this experiment for this batch. It will probably have to wait. Bummer for "Gretchen", but I am sure she'll get over it.

Tomorrow is the day we will brew Laser Salt Sandy Blonde Ale. Stay tuned for the exciting conclusion of Laser Salt and the Beer Model.