Yesterday, of course, was the Members'-Only session of the Great American Beer Festival (GABF). Of course, the SheppyBrew Beer Model and I attended. It was, of course, a great time.

The members-only session is my favorite. It is one of the great benefits of being an AHA member. In fact, I know people who became AHA members just so they could buy tickets to this session of the GABF.

We got in line pretty early, but even still, we were about 3/4 of the way around the Convention Center. The line went really quick once the doors opened, though. We were in the festival before 15 after.


They let the line spread out sooner before the doors this year. I thought this was going to cause a nightmare mess, but it turned out very well.

I, of course, had a list of breweries I wanted to try. The Beer Model, though had her own big list of pumpkin beers, peanut butter beers, fruit beers, pecan beers, and other strange non-beer flavored beers to try. It actually works out pretty well to get some randomness along with my planned list. I didn't usually try the beers that my wife had targeted, but there was usually something at all the booths that I was interested in.

Before doing this post, I took the time to log all my beers (at least the ones that I wrote down) into untappd. If you are not my untappd friend, feel free to send me a friend request and you can see all the beers I remembered to check in both sessions. (I am Sheppy on Untappd). This is the first year I've done that.
It seems I always have to visit Heretic Brewing company. If you are a homebrewer, you recognize the name Jamil Zainasheff, and Heretic is his brewery. This year, I had Gramarye, Shallow Grave, and Tafelbully. All are wonderful beers.

One of the first things I did when I got into the session was renew my AHA Membership and get the free GABF hat.

As you may know, I tend to target sour beers at GABF. While checking in beers on untappd this weekend, I got the "Pucker Up" badge levels 3, 4, 5, and 6. So, I guess you could say I drank quite a few sours. Chances are I didn't even remember all of them. 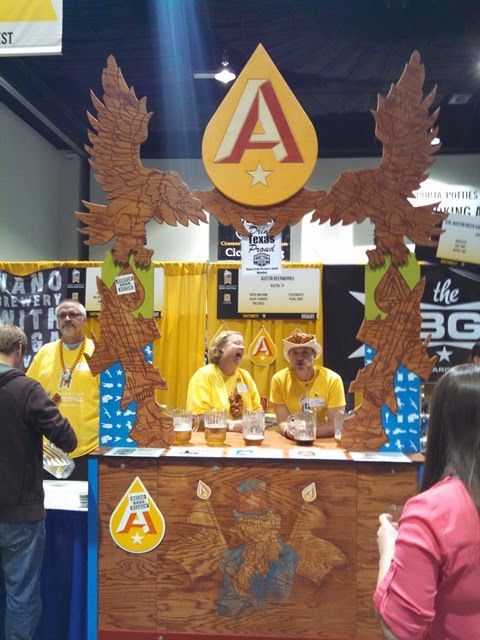 I had one IPA that I thought was absolutely horrible during the session. Other than that, most of the beers were good, excellent, or outstanding. There were a few that were just ok too, but for the most part, the beer quality was great.

Some of the beers that I specifically noted:

Triple Rock Brewery (E25) from California had a beer called Rye Smile. I wrote down that this was the best Rye IPA of the weekend. Nice hop and grain balance. Very pleasant and drinkable.

Moylan's Brewing Company (D32) from California had a sour called Lonely Tart's Club that I thought was excellent and a scotch ale called Tilt Lifter that was top notch. I wrote down "A+" by both in my notes.

Six Rivers Brewery (E4) out of California had a Chili Pepper Ale that was excellent. I wrote down "best pepper ale" in my notes, but I don't think I had any others during the weekend. Nevertheless, it had a nice pepper flavor with just the right amount of heat. At least I thought so.

There was a Lager / Cider mix from T.W. Pitchers called "Snake Bite". It was interesting to me. It probably is not something I would ever drink other than when at the GABF, but if you like cider, you might like this. It was sort of refreshing.

903 Brewers out of Texas had a beer called Sasquatch Chocolate Milk Stout, which I thought was excellent. I wrote A+ by it in my notes. It was a big beer at over 10%, but it didn't taste like it. It was just the right amount of sweet with stout. Wonderful.

Austin Beer Works had a Schwartz Bier that I thought was excellent. I wrote "best schwartz" by it in my notes.

Tomoka Brewery from Florida had a beer that was called  "The King" Peanut Butter Banana Sandwich Imperial Brown Ale. This beer tasted exactly like a peanut butter and banana sandwich. This isn't necessarily what I would want in a beer, but it is remarkable how well the brewer captured that essence.

Round Guys Brewing Company (U8) from Pennsylvania has a Berliner Weisse called "The Berliner". I wrote down that it was my favorite Berliner Weisse of the festival, and I had a bunch of those, so that is saying something.

Former Future Brewing Company (G20) from Denver won a medal in the "Experimental" category for a beer they called Black Project #1. I got to try it soon after the medals were announced. It was an excellent sour beer.


One weird thing is that I tried to visit Captain Lawrence  Brewing Company. When I got to their spot, there was nothing there. The servers around that area just told me that "they never showed up". Weird, right?


Since The Beer Model was wearing her "You're Not Worthy" shirt, we visited Stone. I tried their Double Bastard which is just too much for me. Perhaps I'm just not worthy of the double. I also had Sublimely Self-Righteous Black IPA. Self-Righteous is still one of my favorite beers.

There were many other great beers. As I mentioned above, you can look at Sheppy on Untappd to see other beers that I had. There are just too many to list everything in this blog.

One disappointment of the festival was in the only food and beer pairing presentation we attended, "Charcuterie – The Preservation Process and Pairing with Beer". The staff ran out of the food for the presentation, and quite a few people (including me and the The Beer Model). That sucked, but to me what really sucked was that no one told us they had run out until we waved down one of the servers. We walked out of the presentation disappointed. I was looking forward to that one. But, at least we still had beer to drink.

So, that was the beer festival for us this year. Did you go?

You can read about this and other GABF experiences at Sheppy's Blog: GABF.