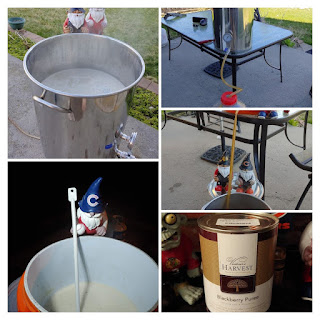 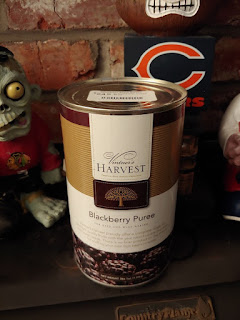 Brew day went well. I got started really early, getting up at 4:00am and getting the mash going by a little after 4:30.

After getting the mash started, I left to hit the gym and get a workout in. Because of this, I had an extended mash. 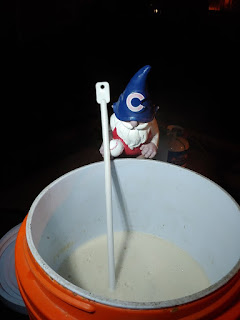 The bigger brew pot is too heavy for me to easily lift and pour water straight into the mash tun. I had to modify my process a bit ... putting the kettle on the table and letting it drain into the tun.

I might have to think about investing in a brew sculpture and / or pump system.

My sparge was interrupted for another workout (if you know what I mean). The beer wasn't in the kettle until after 8:30. 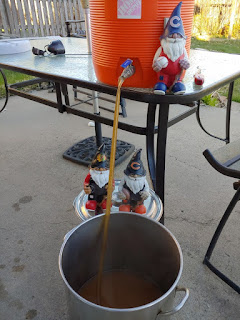 One awesome thing about the new kettle is that it is so much bigger than needed, so I don't have to be careful about boil-overs. The old tiny 8 gallon kettle was always very close to the brim even on 5 gallon batches. I always used fermcap and was extremely careful to watch the pot.

As you know ... a watched pot never boils. 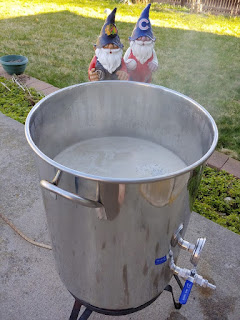 The boil was fairly uneventful. I got my hop additions in at the correct times. I didn't have to worry about boil-over when adding hops.

The bigger volume of water doesn't cool as quickly as the smaller kettle did. I might have to address that as well. 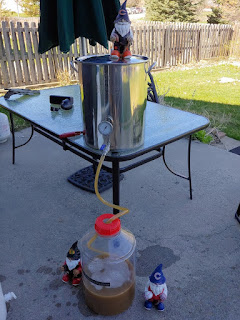 I filled my fermenter through the kettle port rather than racking. Not sure if I'll keep this or not. It does let more trub material into the fermentation. I know it will settle, but it looks pretty cloudy and ugly.

The Beer Model went out to lunch.

While at lunch, The Beer Model asked if I had a name for the beer yet. I'm not sure where she's been all this time, but I always have beer names before I brew.

She told me she thought it should be named ... something like ...

Too bad she didn't suggest it before the beer was named.

Anyway ... the beer is fermenting away.