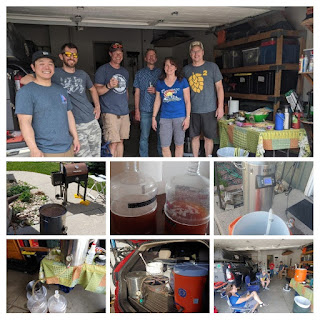 Saturday, May 1st was another Big Brew Day. First Saturday in May.

The Beer Model and I traveled up North to brew a with my buddy "Du". We decided to brew a Lithuanian Lovin' Wheat.

Friday, I made a yeast starter that had been harvested last time I brewed with the Lithuanian Farmhouse yeast ... about 6 months ago. That is a longer time than is generally suggested to re-use yeast (by a bunch), but I was pretty sure it would be ok with a starter.

I also packed up brewing equipment based on the list I made last time I traveled with my brewing equipment (see Traveling Brew Checklist). If I'm honest, it was nice to have the checklist. (Don't tell the Beer Model ) 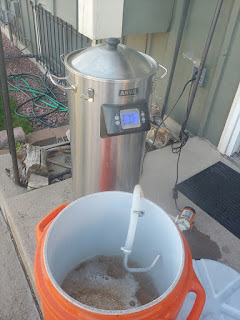 As you can probably tell from the list, I decided to go "old school" and use my mash tun / propane burner rather than the Anvil Foundry. 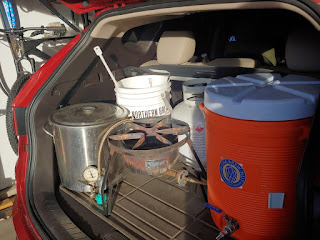 I did use the Foundry to heat up my strike water over night. When I got up in the morning, I mashed in the grains so that I would have a head-start on my brew day once I arrived at "Du's" house. 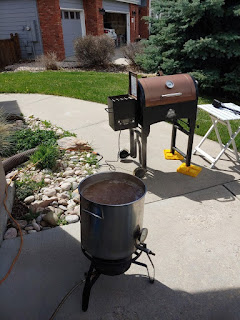 I arrived to find my brewing buddies Du and Doc. There was one of Du's friends staying with him, and Du's wife.
Du had his smoker going with ribs on it.
Doc wasn't brewing ... he was just there to hang out with us. Over the course of the day, a couple more of Du's friends showed up. 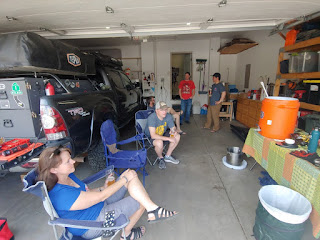 So ... I unpacked and socialized while making sure I had a beer. Then, I got 6 gallons of water heating up to do my sparges.
It turns out that Du was the only other person brewing a batch and he was doing an extract batch, so I was behind from the very beginning. 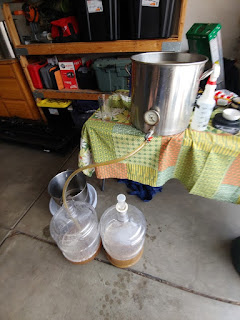 But, with me and the Beer Model keeping an eye on things, we got everything added at approximately the right times.
Du's batch finished before mine. I came in 2nd. (1st Loser) 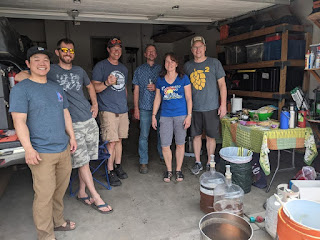 Like usual on my Traveling Brew Days, we racked the wort into our two smaller fermentors. I do that so that I'm less likely to spill when the wort sloshes around on the drive home.
Unlike my usual brew days, the Beer Model and I decided to stay in a hotel overnight. (Du lives an hour and a half away from us now). So, I did pitch the yeast at Du's house. Fermentation started in our hotel stay. 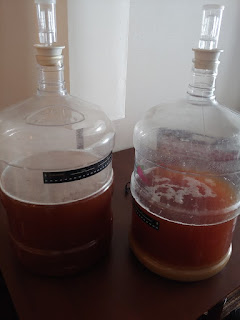 The ribs that Du made were awesome. We ate and hung out more and drank more beer.
Then, we headed to our hotel and took a nap. We had dinner in "Olde Town" Fort Collins.
Sunday, we headed home. When we got home, I combined my two little fermentors into a bigger one.
The beer should be ready to keg in a week or so.