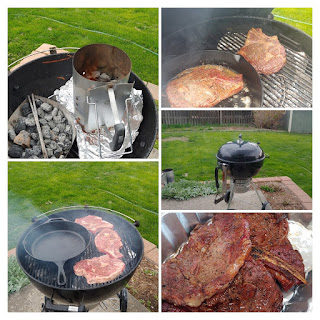 Saturday, I had ribeye steaks in my fridge, and I decided to try making them a little differently.
The way I usually cook steaks is how I did them in Reverse Seared Ribeyes.
Cook the steaks indirect until they are just below their desired doneness.
Move to direct heat over the fire and sear them.
On a couple of youtube videos I had seen people basically the same thing, but rather than sear directly over the fire, they used a cast iron pan to add the crust.
I have a cast iron pan, so I thought I'd give this a try.
So, Saturday, I set up my fire in my two weber charcoal holders. This provided a circle of charcoal which was exactly the same size as my pan. 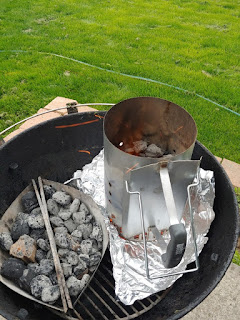 While heating the steaks, I had the pan right over the coals so that the pan could get nice and hot. 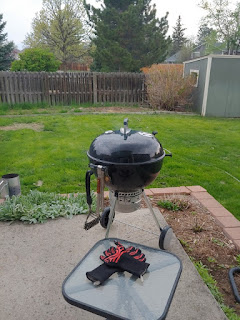 I cooked the steak to an internal temperature of around 125. I don't know where our infrared thermometer is. I wish I had it Saturday so that I could have measured the temperature of the pan. I guess it doesn't matter that much, but I am curious. 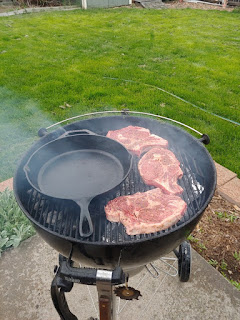 Then, one by one, I placed the steaks on the hot pan and seared the outside of the steaks. There was a really satisfying sizzling sound, and great aroma of cooking meat. 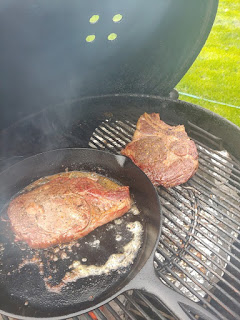 I let the steaks rest 10 or 15 minutes and then served them to the family.
They turned out wonderful. Nice smoky flavor along with the wonderful ribeye flavor. One of the steaks was a little smaller and was probably a bit overcooked, but not too bad. 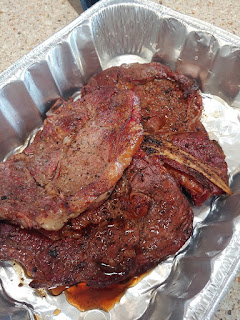 It was a successful cook.
I'm not sure if I prefer this method over the fire-charred method. Maybe I should try a cook where I try both side by side.
Stay tuned on Sheppy's Blog: Steak, and you'll probably find out.
As always, stay tuned on the regular SheppyBrew Channels to see what is happening with beer and other things: SheppyBrew's Facebook Page; Sheppy's Twitter Feed; SheppyBrew's Instagram Page; and SheppyBrew's Website.