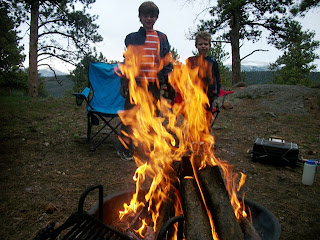 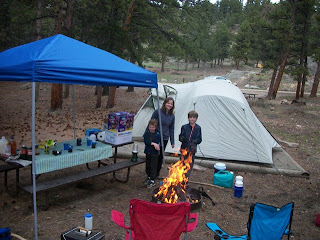 Tyler and Connor set up all the camp fires, collecting pine cones and pine needles, crumpling up paper, and setting up the teepee style wood formations. Personally, I prefer the criss-cross style formation, but the kids did what they wanted to do.

And, as you can see, the fires turned out well. (You can at least see this one. You'll have to trust me on the ones we did not photograph). 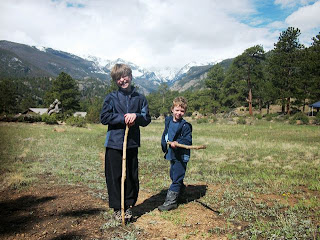 We got a new canopy this year (you can see it in the picture above over the picnic table). It is much easier to set up than the old one. This one can stand on its own whereas the old one attached twine to the poles and then to stakes. It was impossible to set up with less than three people. I really like the new one.

And, it did come in useful this weekend a couple times by keeping rain off us. 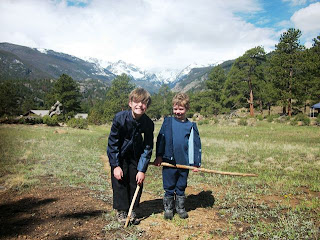 Saturday started out cloudy, but the sun came up around the time we were done cleaning up from breakfast and it was a very nice day by the time we had packed our lunch.

We started our "day hike" from the campsite. We went down to the Cub Lake trail. 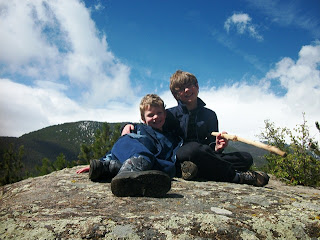 I put "hike" in quotes because we really didn't go very far. There were lots of rocks to climb, so we would go a little ways down the trail and then wait while the boys climbed and eventually came back down to go to a little farther until the next climbing opportunity.

To be honest, I got exhausted just watching them. 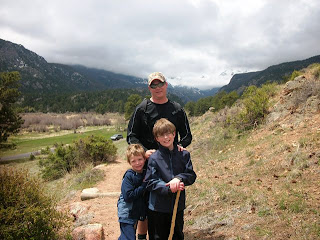 We had lunch on some rocks along the trail. The afternoon got a bit cloudy and we started heading back along the trail, waiting for the kids to climb every few feet again on the return.

We got quite a bit of rain Saturday evening and a bunch into the night, but with the nice new canopy and the awesome campfires the boys helped make, we were pretty comfortable. 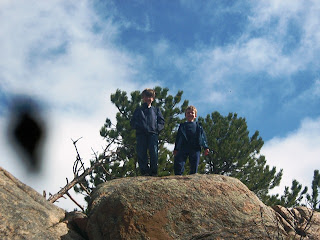 Sunday was about the same. It started out cloudy, but the sun came out around the time we had cleaned up from breakfast.

We had to pack up to head home, but we did spend the first half of the day in the park. 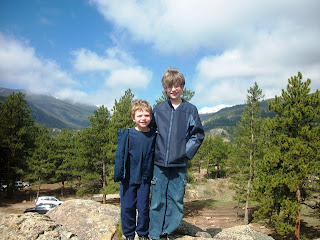 Of course, there were a bunch of rocks to climb close to our campsite, so that is what we did right after everything was packed into the minivan.

It is sort of hard to tell, but the picture just above and to the right and below are all pretty high. Mommy got nervous with the boys climbing so high. 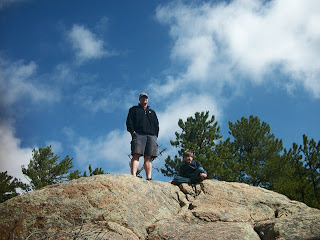 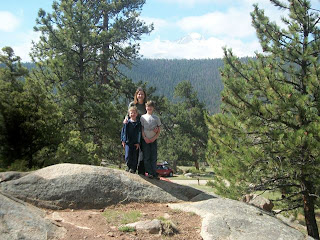 The picture to the right and the one below show the awesome view of Long's Peak that we got from our campsite. Unfortunately neither of these photos do anything close to justice to what it actually looked like. 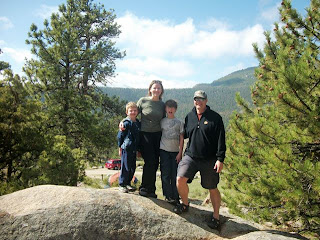 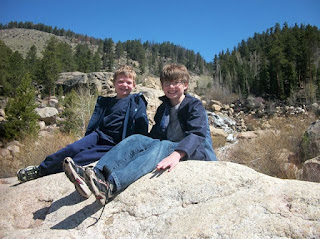 And, after we left the campsite, we headed up to watch the boys some more climbing rocks by the waterfall at the alluvial fan. 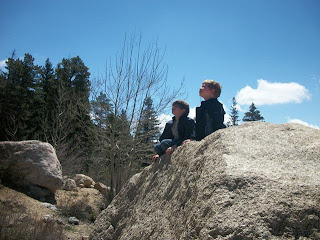 We ended up eating a late lunch at the Estes Park Brewery and then heading home.

At home, we had awesome rib-eye steaks for dinner and of course were able to relax and know that we still had Monday off.