Yes, this post is about the same Breckenridge Brewery Lucky U IPA featured in the youtube videos I posted a few days ago in "Interesting / Amusing news". The beer that was sevendrupal hopped and in the video Lucky U IPA.

We went camping over Memorial Day Weekend. When the Colorado Shepards go camping, the Beer Model and I like to bring beer. Since there has been a relatively new trend of craft brewers packaging their beer in cans, the beer we have been bringing over the past couple of years has been canned. When I was at the liquor store this week, I saw Lucky U IPA in cans, and since I had just posted some videos about the beer, Lucky U IPA is what I grabbed for myself. Tracy doesn't like IPAs, so I got something else for her. 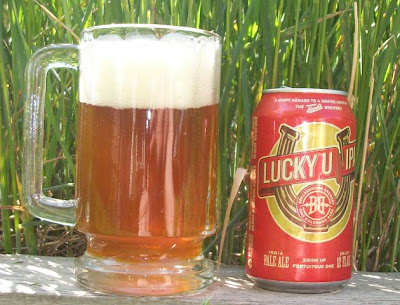 The top of the can says that Lucky U IPA is "A Hoppy Homage to a Denver Landmark The Tivoli Brewery". Not sure what that is about. I might have to research that. Or, if you are reading this and know what that means, let me know. I mean, I know there was a brewery called "Tivoli" and I know where it was located and that it is historically significant to Denver. But, I don't really know how specifically Lucky U IPA is a Hoppy Homage to that brewery.

I like this beer. The beer uses Amarillo, Magnum, Perle, Cascade, Apollo, Fuggle, and Goldings hops (that is 7 of them in case you didn't count them, thus the sevendrupal hopped commercial, I guess). As you might imagine, it is hoppy. It has a nice IPA bitterness.  It is certainly not as bitter as some of the crazy double and imperial IPA's out there. It has 68 IBU for a 6.2% ABV, which is significant, but not unreasonable. I have used all those hops in my home-brews except Apollo. This is probably not a hop combination I would ever come up with. It works in this beer, although I don't think I have the sophistication of pallet to pick out Perle or Fuggle from this line up, and I sort of doubt most pallets would taste a difference without some of those hop-types. The hop flavor is very citrusy, with quite a bit of orange or maybe mango flavors. Really yummy for those hop-heads out there.

I think the underlying malt profile is great.  Obviously, the hops dominate the flavors, but I think the malt-bill does a great job balancing out the beer. The website says they use Two Row Pale, Munich, and Carmel malts. All of those are pretty standard in American IPAs, but they also use Torrified Wheat.  I have never used Torrified Wheat in any of my own beers, and to be honest, I am not sure what would be the reason to use it (as opposed to just using a wheat malt). That might be another thing I need to research. I suppose that it gives the beer a bit of body and probably a bit more head-retention. I would think it would be similar to using a flaked grain. But, again, I'll have to research that.

It is a great beer. Next time I'm at Breckenridge Brewery, I think this is probably what I'll order. There is a high-probability that next time I go camping, this is the beer I'll pick to bring along.

I also brought a growler of Sheppy Brew's 15 Year Anniversary Amber Ale camping. It is still an amazing beer, even though we drank it out of tiny little camping cups. Its hop character is beginning to fade, but that only seems to bring out more of the nice caramel notes from the malt. I really enjoyed drinking it this weekend as well.

We brought a growler of Whisky Wife Wit as well, but we never got a chance to pop it open. On Monday, though, I found a liter bottle of the older batch of WWW (the batch that was bottled almost a year ago) and had some of that. Its orange flavor came through very nicely. I am impressed (and surprised) with how well the WWW seems to age.
Posted by ESheppy at 6/01/2011 10:08:00 PM