I brewed up my Rocktoberfest lager this weekend. Yes, it is a bit late to save the Rockies season. I'm certainly not going to be able to drink it while watching them in the playoffs this year. It is also not going to be ready for any traditional Oktoberfest time period. Luckily, I still have some left from last time I brewed it, which was back in January. I had a bottle the other night and it was totally fantastic. Come to think of it, maybe I'm making this batch for NEXT year. On second thought, I can drink an Oktoberfest beer in the winter. Don't worry, it will be fine.

If you followed the link to the recipe, you may have noticed that my bittering hops are columbus instead of Hallertauer. This is because the Hallertauer hops were very expensive at the LHBS and I figured I might as well just use less of the higher alpha hops for the main bitterness. I guess we will see, but I probably won't detect a significant difference. 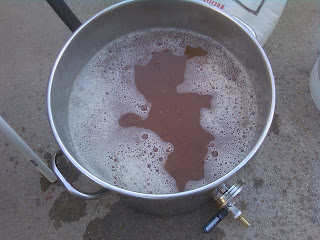 I also decided to try Saflager W-34/70 instead of Saflager S-23. I'm not sure what the difference will be there. Based on the very limited descriptions on the Fermentis saflager page, I suspect the W-34/70 will be a cleaner, maybe drier flavor profile. I hope I don't regret this choice. Again, we'll see. If I was thinking clearly, I would have gotten one of each and tried a side-by-side comparison. Oh well. That way, I would not have been able to keg it. Now I can.

The Beer Model had to go to the late service today. Why the pastor made her do this on a day when the Bears play an early game that I actually get on T.V. is something I will have to take up with him. Good thing God invented my DVR or else ... well, I guess I would have had to just deal with it. Anyhow, the change in our regular church time made me adjust my brew schedule. I got started earlier than usual in the attempts to get through the boil and let the wort cool during church. It worked out ok, but I probably should have gotten started a bit earlier than I did. Oh well.

Speaking of cooling, I have a new piece to my brew day process. Remember I've mentioned that during hot summer days, I have been having trouble cooling the wort as low as I wanted. This being a lager, that became even more critical. So, after last brew day, I bought myself some copper tubing and other miscellaneous stuff to make a pre-chiller. The idea is that the pre-chiller sits in an ice bath so as the cooling water runs through, it gets much colder than it come out of the spigot. The water runs from the pre-chiller into my old wort chiller. With the colder water, the wort can get cooler.

And, it worked as designed. Of course today was not nearly as hot as the previous couple of brew days, so we don't know exactly how well it would work during the middle of summer, but at least it did what it was supposed to today.

So, everything went well. Mash efficiency was good. Got everything into the fermenter pretty early in the day. Now, we just have to keep the lager temperatures cool enough.
Posted by ESheppy at 9/11/2011 11:42:00 PM