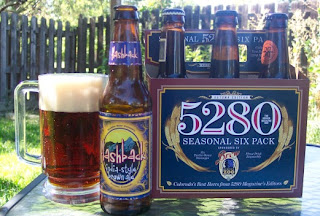 The first beer I've had from this is Bolder Beer Company's Flashback India Brown Ale.

The beer says it is 6.88% ABV. I don't know the IBUs, but they are substantial without being too much.

I really like this beer. It is IPA hoppy in an American Brown ale. It finishes very clean with lots of citrusy Cascade flavor and aroma. The beer is a very clear brown color from a chocolate and caramel malt that starts the beer off pretty sweet.The balancing bitterness really comes through nicely to make the beer extremely nice to drink.

Email ThisBlogThis!Share to TwitterShare to FacebookShare to Pinterest
Labels: 5280, Brewing