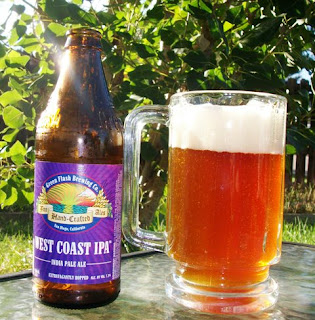 Green Flash Brewing Company is one of millions of craft breweries located in and around San Diego, CA (millions might be a slight exaggeration). Their West Coast IPA is listed as tied for #48 on my 2011 Best Beer in America poll. I saw it in my liquor store last time I was there (the same time I picked up Dogfish Head Palo Santo Marron).

West Coast IPA has an ABV of 7.3% and claims 95 IBUs. On the "Our Beers" page of the Green Flash website, it says:


A menagerie of hops is layered throughout the brewing process: Simcoe for unique fruitiness and grapefruit zest, Columbus for strong hop pungency, Centennial for pine and citrus notes and Cascade for floral aroma. A multi-dimensional hop experience.


The bottles say "Extravagantly Hopped" at the bottom, which struck me as a cool little description. You might call it a bit redundant for a beer named "West Coast IPA", but I thought it was an elegant, simple way to  describe their beer.

Shocking that an IPA would appear on the list ... I know (that was sarcasm by the way).

The beer is a medium copper color, with an off-white creamy head leaving a nice coat of lacing. Lots of bubbles in this one as it has a significant amount of carbonation. Pretty typical of an American IPA.

The aroma is bright citrus. Lots of grapefruit mixed with pineapple and maybe a bit of orange. Also the typical IPA piny resiny smells.

The flavor is more of the same. Lots of citrus. Lots of pine. There is a bit earthy notes that probably come from Columbus hops. The mouth feel is light and the high level of carbonation plays up the hoppy assault to the taste buds. Of course the beer finishes nice and bitter.

I may be picking of a bit of honey malt at the beginning if I really search for it. There is a nice malt back-bone. It is just not very apparent at first as the hops really dominate the beer.

I like it. This is one of those beers I'd love to take camping. I don't think they package it in cans, though.