Last time I was in my liquor store, I grabbed a 4-pack of Dogfish Head Palo Santo Marron. This was listed as tied for #34 on the 2011 Best Beer in America poll. Of course Dogfish Head will be at GABF, but I stayed away from that huge line last year, and expect I'll stay away again this year.

Just as a little editorial interjection. I will never understand why Sam Calagione's show, Brew Masters, was not more popular on the discovery channel. Their most fatal flaw was probably that it was a show that I liked. Whenever I decide I like a show enough to DVR every episode ... that is when the show is probably in trouble. Maybe, this is a topic for another time.

Palo Santo Marron is one of Dogfish Head's year-round beers. One thing you have to like about this particular brewery is that they are not afraid to make beers big and unique. That was one reason I thought Brew Masters was so interesting. This particular beer is 12% ABV and is listed on their website with 50 IBUs.

It is listed on ratebeer as an American Strong Ale, which isn't really a specific beer category. It basically is just a classification of these unique, high alcohol, intense, potent beers that American Craft Breweries like to make.

Dogfish says the Palo Santo Marron is a big brown unfiltered beer aged in handmade wooden brewing vessels made of Paraguayan Palo Santo wood. Palo Santo means "holy tree" and it's wood has been used in South American wine-making communities. The beer is highly roasted and malty with caramel and vanilla flavors coming through.

To be honest, this reminds me more of an imperial stout than anything else I can think of. It pours jet black and very thick (not sure why they claim it is a brown). The head is about a finger of darkish tan creamy goodness.

Got a generous amount of roast in the aroma. Maybe a bit of chocolate, and perhaps some vanilla cherry.

Tasted a bit sweet to start with more cherry and vanilla than in the aroma. Lots of dark chocolate and finished with a woody, roasted, perhaps a bit smoked flavor. It was very smooth and creamy. It actually finishes pretty bitter after the initial sweetness. I couldn't detect any hop flavor in the beer as it is pretty dominated by the roasted dark grains.

It has perhaps a bit more warming alcohol than I would like, although, the complexity of the rest of the flavor components did a good job of balancing it out. The alcohol didn't hit me as hard as the Ommegang Three Philosophers I had just the other day, although at 12%, it is considerable higher in alcohol than Three Philosophers.

Overall, it is not too bad, although it is not a beer I will likely seek out. It is the kind of beer that would be great to sip late in the evening when I want to quiet down from a long hard day, although, I would choose my own Tweedle Beetle Imperial Stout over this beer for this purpose. 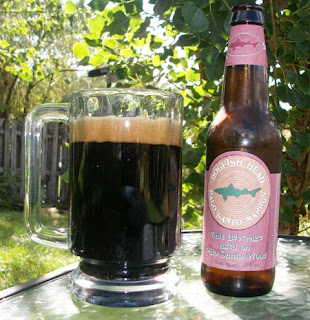