Right after the 2011 Best Beer in America poll came out, I stopped by my local liquor store to see if I could find a beer to check off my list. I came across a bottle of Ommegang Three Philosophers, and grabbed it.

It has been sitting in my fridge since then.

Belgium beers are a bit tough for me to evaluate. I am slowly but surely developing an appreciation for the funk derived from most Belgium yeasts, but that flavor and aroma really has to be restrained for me to like a beer. To be honest, if I can detect any flavor that is obviously yeast-driven, I automatically like the beer less than something with a cleaner yeast profile. That is why SheppyBrew's Buckwheat BPA doesn't really use a Belgium yeast, and I ferment it pretty cool. Yes, I should probably stop calling it a Belgium Pale Ale.


Just as an aside, my virtual brewing buddy Crazybrody mentioned my BPA in his blog (see BP Ale Spill). He decided to brew a Belgium Pale Ale because I have apparently said good things about Buckwheat's. Based on some of his comments on facebook and also on his blog, it sounds like he isn't really a huge fan of the Belgium funk. I'm afraid he isn't going to like his BPA. He used a true Belgium yeast and he fermented very warm.

So anyway, I'm not a great evaluator of Belgium beers. You can take that for what it is worth. As I said, I am slowly evolving my pallet to a higher appreciating of these types of beers, but I probably still have a long way to go.

Back to Three Philosophers:  It is a Belgium dark, strong, quadrupel ale blended with a Belgium Kriek. It weighs in at 9.8% alcohol, which is substantial. I expected a nice, rich malty backbone with a bit of tart, sour, cherry flavor. 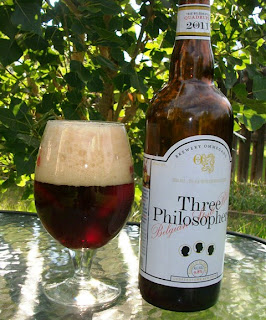 I served it to myself in a New Belgium globe glass (yes, I know I need more glassware). The cork made a very audible pop when I opened the bottle, and the beer was nicely carbonated with an awesome tall thick tan head. The body of the beer was a beautiful deep burgundy color.


From the aroma, I got some cherry, and just a touch of that Belgium musty funk. I got maybe a bit of alcohol, and certainly a nice deep malty smell. It was very pleasing.

The flavor was slightly sweet, but I thought very well balanced with a bit of a cherry tartness. The musty phenolic esters really played nicely with the cherry flavor. I got a lot of what I thought of cherry pit tannins, which at first came across as almost an oak-aged flavor. I thought this really brought a nice complexity to the overall flavor. I did taste a bit of alcohol sweetness, but it was very smooth. There was a touch of sourness that also complemented the whole tasting experience. This beer is all about layers of flavor and I am sure more sophisticated pallets could write about the overall flavor more elegantly.

The alcohol catches up with you quick ... even a big guy like me felt pleasantly buzzed pretty quickly. I probably should have shared this with several people, but all I shared it with was the SheppyBrew Beer Model. Her comment was "not bad". I offered her a glass, but she decided that she would drink SheppyBrew instead.

I paired the beer with a wonderful meal of pita pizza made by my wife. Yum! Of course, pita pizza pairs well with everything.

This was listed as tied for #29 on the 2011 Zymurgy Best Beers in America poll. Not that it matters, but it is tied with Oskar Blues Ten Fidy. I would have to say that I like this one much better than Ten Fidy. Now that I've tried Three Philosophers, I've still had 3 of the top 5. I've had 8 of the top 10. I've tried 24 out of the whole list of 52 beers. 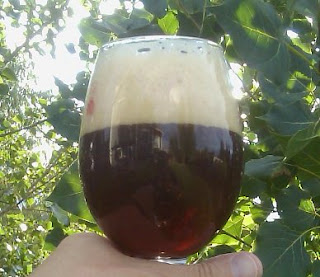