We have had the 2nd part of a Mr. Root Beer kit for quite some time without a whole lot of interest from the kids about making it. In fact, I think the last time we did make root beer, I think was back in June of 2009.

But, for some reason, recently Tyler has been asking to make root beer, and this past Sunday, he and I finally did. 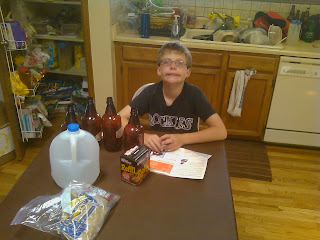 The process for making Mr. Root Beer is extremely simple. Basically, you mix up a bunch of brown and white sugar with water and the flavorings components included with the kit. Add a bit of yeast for carbonation. Let the bottles sit a few days to let the yeast produce carbon dioxide. Put the bottles in the fridge a couple of days and drink.

I think we will drink some this coming weekend (Labor Day weekend). Last time we tried it, it came out simply fantastic. I don't think the age of the flavoring compounds will negatively affect this batch, so I expect it to taste wonderful as well. Connor probably won't try any. He has it in his head that he won't like the beer part of root beer. Tyler is really looking forward to having some, though. 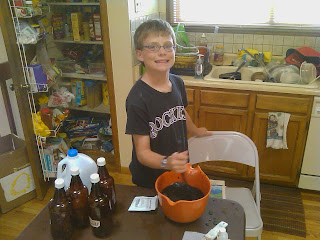 After Tyler and I were done mixing up the root beer. I asked Connor if he wanted to make pretzels with me. Connor gets pretty excited about cooking with his dad, and did want to make pretzels with me. Perhaps he is going to be a chef someday. My latest issue of BYO Magazine has an article about Beer & Pretzels, and of course there is a recipe for pretzels included with the article. The kids both really like getting the big soft pretzels when we someplace that sells them, and I knew when I saw the recipe that Connor would like making and eating these. 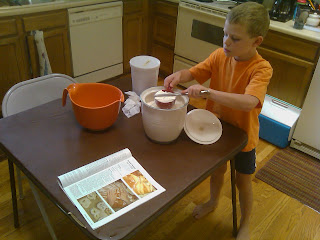 The pretzel recipe is very simple. It is just flour, water, yeast, a bit of salt and some sugar for the yeast to eat. As this was in a brewing magazine, the sugar of this recipe comes from liquid malt extract. Luckily, I had some left over from when I made  Psychotically Dark and Bitter IDA last week. 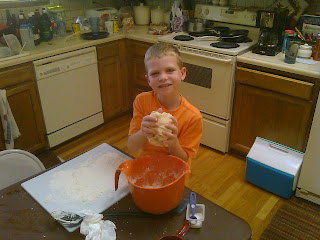 Connor really liked kneading the dough, and got really excited about seeing it rise. After mixing up the dough and letting it rise a couple times, we formed the pretzel shapes. Then, we boiled each pretzel for about a minute in a solution of water and baking soda. After the boil, they went into the oven for 15 minutes or so. 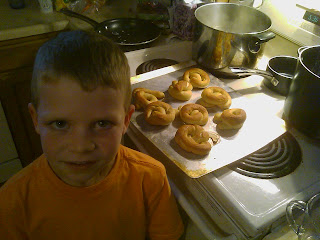 The timing ended up perfect to have as appetizers for our dinner. Right out of the oven is the best way to have home made pretzels. These were awesome.

The recipe said we would get 12 -15 pretzels with this recipe. We only got 8. The dough didn't rise as much as I thought it would, so I wonder if the bread yeast we used was a bit old and lazy. Perhaps I should have let it rise longer. Even so, it was a huge success as the first time we've done this. I think we will have to do it again soon.

Saturday, we drove up Mt. Evans. Here are some pictures of the trip up: 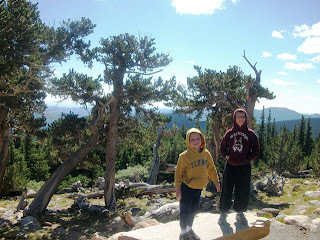 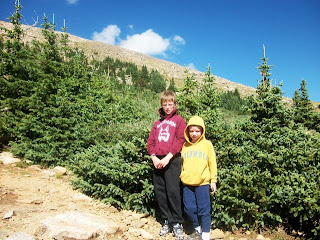 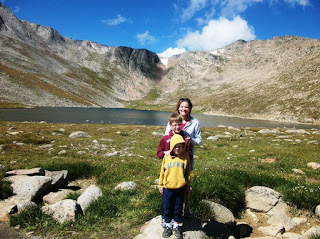 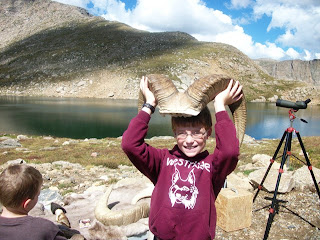 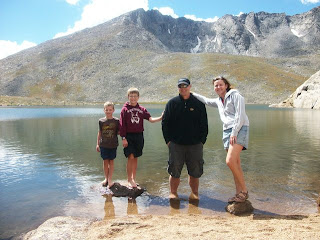 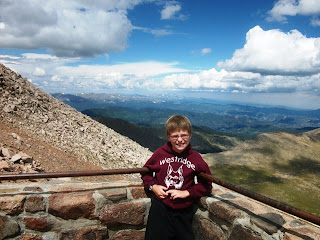 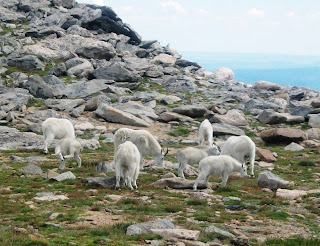