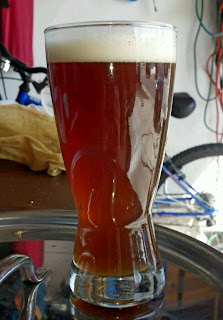 Well, if you read this blog regularly you may recall that a couple of months ago I tried to brew SheppyBrew's Eric's Irish Red Ale, but failed miserably. I did decide to go ahead and ferment out and bottle almost five gallons of the failure, naming this beer Eric's Red Failure.

A couple weeks later, I successfully brewed a batch of Eric's Irish Red as planned.

The main problem with Eric's Red Failure is that my wort chiller came apart in the beer causing the whole batch to  be watered down considerably. I would say about a gallon and a half of water diluted down the wort. I was extremely close to just dumping this batch, because I really thought this was too much extra water to make this beer redeemable in any way. I figured it was worth the effort to ferment it out for the scientific information it would provide me.

As it turned out, the Red failure was not all that bad. Yes, it is a thin beer compared to all of my other home-brewed beers, but the malt taste was actually flavorful and (if I say so myself) pretty good. I would not quite call it watery. It certainly was no Bud Light. I would actually drink this "failure" over quite a few "popular" beers in the marketplace. It is actually a very nice low-alcohol session beer.

I did bring about half of the Red failure into work to give away. I got quite a few nice comments on the beer. To be honest, I think I got more positive feedback on the Red failure than I did on Stouticus or any of the other beers I've brought in. A bunch of people really liked the name "Red Failure".

As "failures" go, this one turned out well. 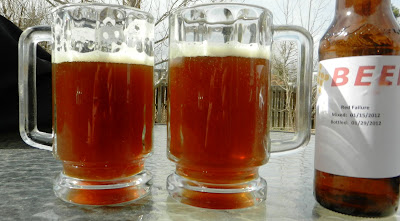 Visually, they are surprisingly close. The Red Failure is slightly lighter in color and more transparent, but not obviously so. I had to make an effort to hold them up to a light source to see this difference. Eric's Red has better head formation retention and lacing on the glass, but again not as obvious a difference as I would have expected. The Red Failure is more carbonated as seems to be typical with my bottled conditioned beers over my kegged beers.


Aroma is also extremely close. Eric's Red has a fuller malt aroma than the Failure. This is more obvious than both the color and the head characteristics, but again, not quite as big a difference as I would have expected. Neither have hop aroma to speak of. As an Irish Red, this is by design.


The malt flavor is the same. The Red Failure is noticeably thinner, but I would not really call it watery like I would lots of BMC beers. It is no where close to as watery as those horrible low-carb or light beers out there. It is not even as watery as something like Budweiser.

And so, all is well in brewing that ends well in brewing. This whole experience highlights my buddy Charlie's famous saying RDWHAHB (for those of you who are not home-brewers "Relax, Don't Worry. Have A Home Brew").