As you may remember from yesterday, my son and I were backpacking this weekend in the Lost Creek Wilderness area. It was not a very long trip, but since it was his first time, we didn't want to over-do it.

Friday afternoon, I picked Scooter up from school. I had to take him back home because one of us had forgotten something. Weird, because it is something I (... er ... I mean one of us) NEVER forget(s) to take with me (... er... I mean us?)

Since it would be pretty late by the time we got to the trail - head, our plan was always to camp somewhere along the way out of the mini-van on Friday night. My intention was to try to stay in Kelsey Campground, which is an actual drive-in campground along the way. We got there and all the sites had been reserved for that night. This is weird because I am sure that the reservation site says there are supposed to be two "first come first serve" campsites there. So, we had to go on.

This got Connor even more excited. It meant that we would be finding a spot along one of the Pike National Forest service roads and just setting up the tent. My wife and I used to do this often, but since we've had kids we have camped in "official" camp-grounds. This whole drive-and-hope-you-can-find-a-spot-on-the side-of-the-road thing was new to him.

Eventually we found an adequate spot along FR211.

We actually parked and set up our tent in this burn area Friday Night. We spent some time walking around taking pictures and talking about how Ann Dow purposely started this whole thing because she wanted to be a hero. I am not a fan of people who accidentally start forest fires (actually, I am not really a fan of naturally occurring forest fires either). The fact that someone purposely started the largest forest fire in Colorado's recorded history makes me angry. The fact that this person did it to get attention makes me ill.

It burns me up (forgive the pun), and at the very least, my kids know how much I dislike irresponsible behavior in regards to campfires. 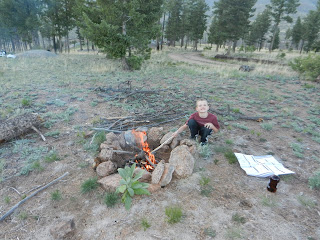 Anyway, things are starting to grow back in the area, and Connor and I had a spot to camp before starting our back-packing trip the next day. After we walked around, we grilled up some brats and had a couple of beers (actually only one of us had beers the other had cool-aid).

We gathered fire wood (there is lots of dead dry wood lying around this area) and had ourselves a little camp-fire.

Eventually we went to bed (of course dousing the camp-fire with lots of water first). I read Flat Stanley (at some point I need to tell y'all what really bugs me about Flat Stanley).

We were both pretty tired, but really ready for tomorrow's big adventure. SheppyQuest Lite had begun!

I'll post pictures along with a description of our adventure tomorrow or the next day.

Oh .. by the way ... some of you might be wondering why it was just me and my youngest son on this adventure.

Big brother and Mom were at Destination Imagination Global Finals. Tyler's team was the only elementary school team competing in the middle school "Assembly Required" group. Out of 69 teams, his came in 6th place. Not bad.
Posted by ESheppy at 5/27/2012 05:48:00 PM