It is now time to continue the story of SheppyQuest Lite and Father and Son Backpacking trip Part 1.

When we last left you, the brave young adventurer and his timid frightened father had camped in a random spot just off a forest service road on the way to the Wigwam Creek trail head.

We woke up Saturday morning and had some granola bars for breakfast. We packed up our camp and continued along the road toward the trail head.

We got to the trail head around 9AM. I have never seen the parking lot here so crowded.

We got a photo of my son at the trail head. Not sure where the smoke haze was coming from. It was a bummer for scenery pictures.

My original plan was to only hike a short way in before setting up camp. I thought we would set up camp and then hike the rest of the way to a spot known as "The Shaft House" (more on that later). We got to the spot that I was thinking of. I asked my boy if he wanted to set up camp. He said he didn't want to stop. He wanted to try to make it all the way.

So, we continued on. We did not go very fast, and Connor did ask to rest quite a bit. I asked him several times if he was sure he didn't want to pick a campsite and hike the rest of the way without all the heavy equipment. He kept saying that he wanted to make it all the way.

Eventually, we got to a point where it was either set up camp or not have another chance until we made it all the way. It was also at the point on the trail where we were going to start gaining altitude for awhile. The pace at which we were going made me think it would take us forever to make it to the "Shaft House" fully loaded.

I told Connor that we had to either set up camp here, or we would not get another chance for a long time and he finally agreed that we should set up camp.

We set up camp in a nice spot close to the creek, but far enough away to satisfy the "Leave No Trace" guidelines (camp at least 200 feet from a water way).

After we set up camp, I emptied my pack of everything except a lunch, a couple of jackets, my water pump, and some other "just in case" items.

From this side of the creek, we discovered some logs that we were able to use as a bridge.

Then, we started up. We hiked for a couple hours and had lunch. We went slow enough that it was obvious that leaving the heavy stuff behind was the right choice.

Finally, we made it to the "Shaft House" location.

In the late 1800's through the early 1900's, there was an attempt made to damn Goose Creek to make a reservoir. There are a couple of restored buildings from the old work-camp and a few pieces of equipment left in the area. This spot is known as the "Shaft House".

Connor really got a kick out of the old buildings.


There are also some really awesome huge boulders in the area to play around and under. Several of the rocks are situated so that they make caves, which is something that my son always likes.

We didn't spend nearly as much time in this area as either of us would have liked. We both wished we could have made it all the way here with our tent and be able to actually camp in this area. We decided that maybe if he practices carrying his back-pack we might be able to make it next time.

I guess we will see.
After playing around in the rocks and buildings, we headed back to our base camp. Connor's velocity was higher going back than it had been going to the Shaft House area. I am not sure what to make of that.


We got back to camp and spent quite a bit of time walking around in the creek (for the most part I just sat there with my feet in the water). 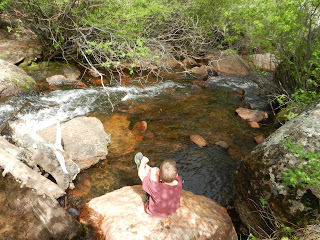 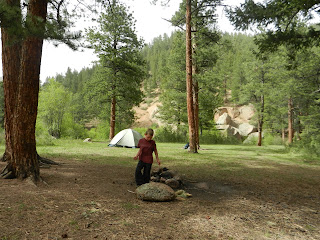 Connor gathered firewood and made a little "pyramid" of wood in case we decided to have a camp-fire. 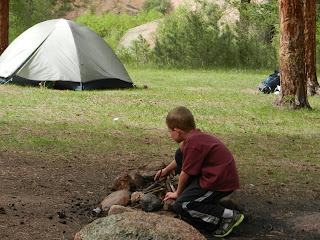 Unfortunately, it was windy at night and we decided not to start a fire.

For supper, we had freeze-dried macaroni and cheese and granola bars.

We also tried a freeze-dried ice cream sandwich that we had seen in REI when we were picking out back-packing meals. In case you ever wonder what freeze-dried ice cream sandwiches taste like and think you might want to try one ... don't. Just don't do it. It tastes exactly like I would imagine styrofoam would taste like if someone tried to flavor it with vanilla and chocolate.

If you are someone who makes vanilla and chocolate flavored styrofoam, I hope I am not offending you. This ice cream sandwich was HORRIBLE. Most of the freeze-dried meals that I have had taste very good after a day of hiking. The ice cream sandwich is not one that we will get again. 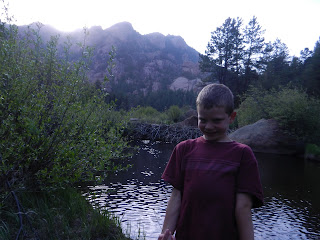 We did not have a fire Saturday night. It was windy enough that it would have been dangerous. Connor was bummed out, but got over it. I read Flat Stanley to him instead after it got dark.

The wind got really strong over night. Poor boy told me the next day that he didn't get as much sleep as he usually gets. It was also pretty cold in the morning until the sun made it up over the blocking mountains.

After it warmed up a bit, we had breakfast (he had oatmeal; I had freeze-dried bacon and eggs).

Then, we packed up and got on the trail to head home.

Connor went much faster on the way back to the mini-van than he had on the hike in. Not sure why. I asked him and he wasn't sure why either. Had he hiked like this on the way in, we probably would have made it to the Shaft House to camp with no problem. His pack was not any lighter. There was a bit more down-hill on the way back than on the way in, but not enough to explain his quickened pace. I guess it is just one of those things I cannot explain about my little boy.

So, I am going to call SheppyQuest Lite a success. We both had fun and we both still feel we want to do this again. Next time, we will probably bring Big Brother and maybe even Mommy. We have not decided when or even where the next back-packing trip will be.