Here are the most viewed pages over the past 30 days:

#6 ... Blending the Sour Pumpkin Wit Jan 12, 2013 ... I wrote this in January, so we finally have a new member of the monthly list. I shared the experience of blending and bottling a combination between my Whacko Wife Pumpkin Witbier and my my Rationalité Poison d'Ereeeek. 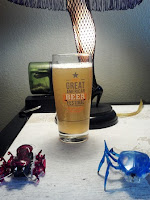 #7 ... November Blogging Dec 1, 2012 ... Another one we have never seen on these lists. I am not sure what brought traffic to this post in January, but it might be my discussion of the "dirndl cartoon".


A couple more posts of note this month:

Sasquatch Hunter Brew Day Jan 1, 2013 .. was doing well most of the most, but did not make the final list.I think the fact that this was posted on January 1st and the list is a rolling 30 days probably hurt this one, so I am giving it an honorable mention.

7C Düsseldorf Altbier Dec 31, 2012 ... also did well, but was probably in a similar "no-man's" land that will probably mean it will never have a chance to appear on these monthly lists.