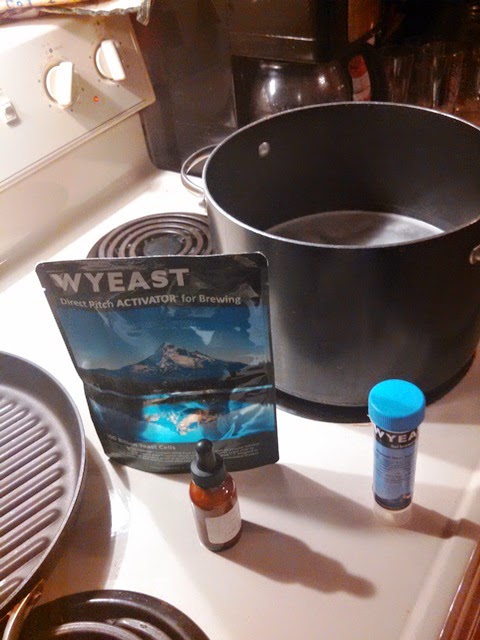 Well, I told you in Seasonal Saisons that I would be brewing my "Autumn" Saison. My "Winter" Saison was black. My "Summer" Saison was yellowish orange. The Autumn Saison is Amber colored, right in the middle of the previous two.

I decided to add pumpkin to this recipe, pretty much so that the "harvest" part of the name . Originally I was going to add several different types gourds and perhaps other types of things that are harvested in the fall, but I decided to simplify.

Before the end of the brew day, I wished I had simplified more by leaving out the pumpkin completely.

I did brew this last Sunday.


I added the canned pumpkin right into the sparge water. This made the water eerily orange. I had decided to use a grain bag in the mash tun in case the pumpkin caused a stuck sparge. I also did a step-mash with a protein rest which I was also would prevent the sparge from getting stuck.

I got the temperature perfect for the protein rest of the step-mash. Right away it was 120, which was exactly what I had planned. 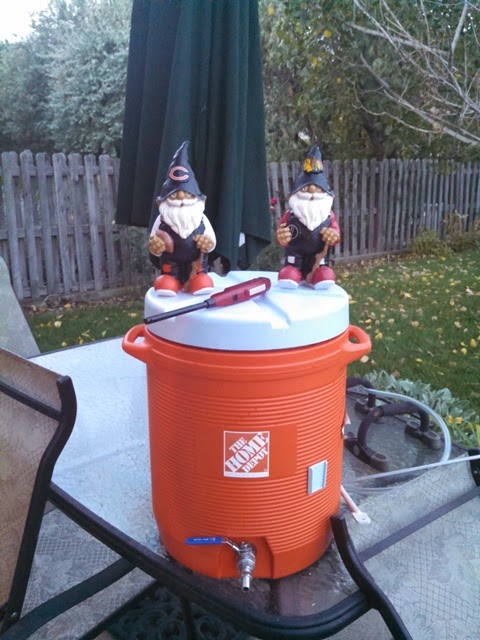 The second step didn't go quite so smoothly. My original infusion brought the temperature up to 156ish. Too high. I cooled it quickly with ice down to 140. Too cold. 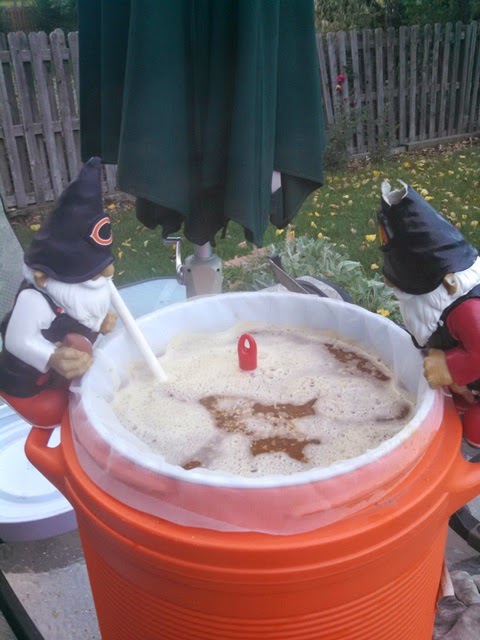 At this point, the mash tun was too full to use hot water to bring up the temperature, so I did a kind-of-sort-of decoction. All I did was scoop out about half a gallon of the grist and water from the top of the tun and boiled it. Then, I added it back into the mash. After doing this twice, the temperature was between 145 and 150. Great. 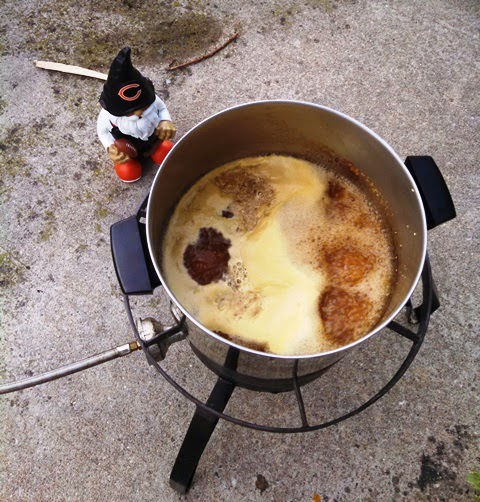 I ended up being very glad that I went with the grain bag, because the flow during the lauter did stop. By lifting the grain bag, I was able to get the flow going again. Eventually I got the right amount of water into the kettle. It was a little low in gravity, though, so I added some DME and some brown sugar to bring the gravity up a bit. 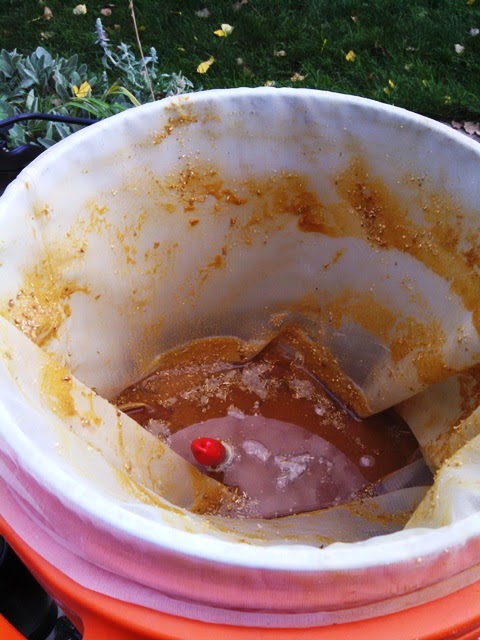 The boil went pretty smoothly, although it got increasingly windy so I had to keep an eye on the flame. The flame never went out, so I guess I didn't really have to watch it. 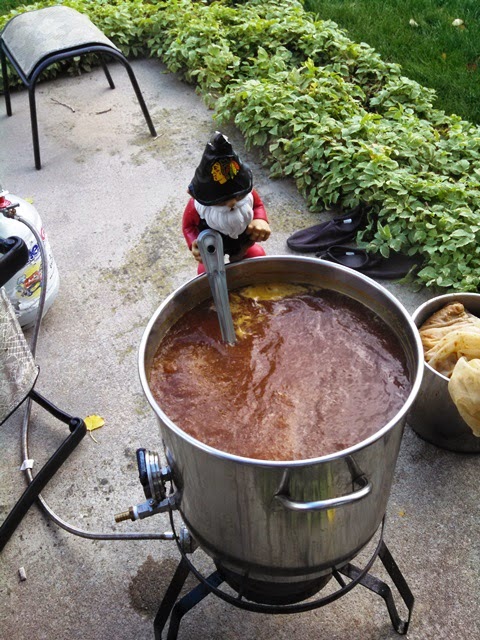 It started to rain as I was emptying into the fermentor. I got the wort transferred before it started raining too hard. I got the wort cooled to about 64F before pitching the starter of yeast. 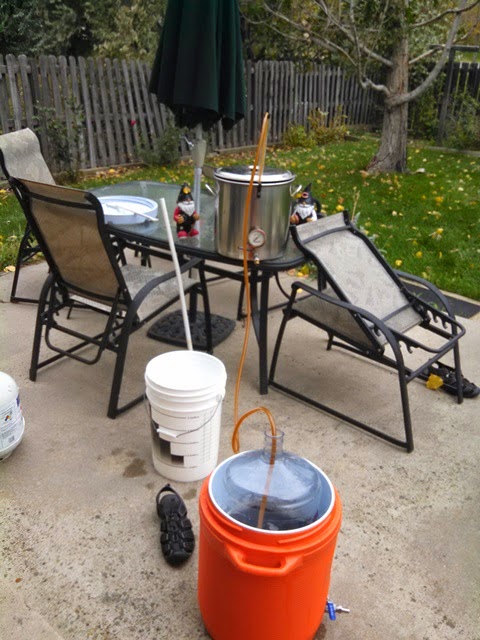 And there was kraussen before bedtime, which is always a great sign. 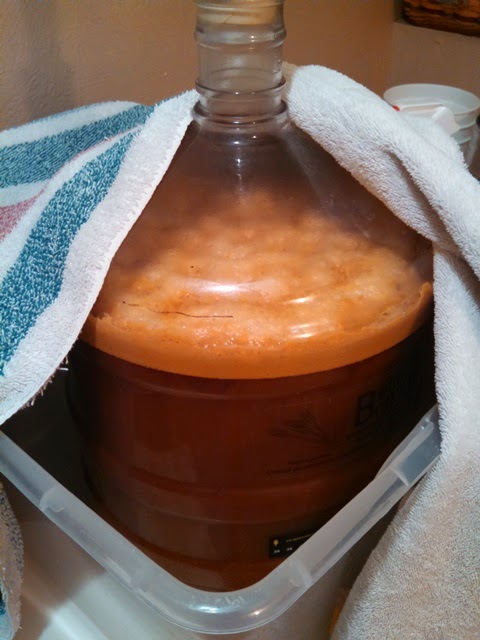 It is fermenting away right now. I can smell Saaz hops from the airlock. I am thinking this will be another great Seasonal Saison.

I've decided that this mashing pumpkin is just not worth it. The "decoction" was sort of fun, but I don't think I'll do that "by design" at any point. I'm just too old for extra brew-day effort.

I should be drinking this beer before nid-November. Should be yummy.

Be sure to stay-tuned for updates on this beer.