I brewed my Hail Storm Summer Saison on Sunday. Technically it isn't Summer, yet, so it is a little early to be brewing it, but it will be Summer by the time I'll be drinking it. It will be nice to have it available early in the season.

This is the third time I brewed this beer.

The recipe this year is the same as it was last year other than hop boil times moving a bit to take into account differences in alpha acids. 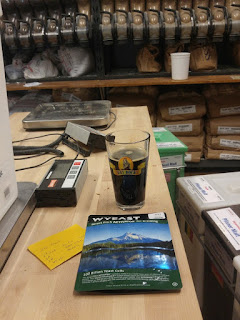 Hail Storm, is the summer version of my Seasonal Saisons series of beers. It is fairly hoppy, and its ABV is a bit on the low end of saisons stylistically. It is pretty light in color. Other than the fact that I brew this recipe to be cosummed in Summer, there is nothing really special about it making it a "Summer" saison rather than Winter, Spring, or Autumn. 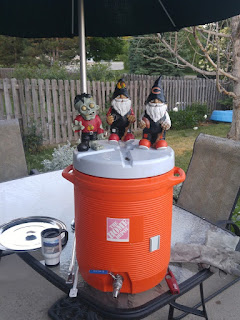 Brew day went fine. Even though we are not technically in Summer, yet, the weather was certainly Summer-like. It wasn't as hot as it was Saturday, but it was still on the warm side for this time of year. 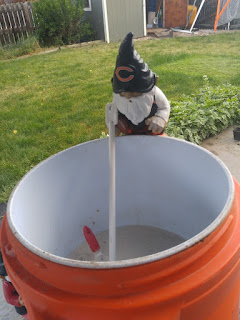 I pretty much got everything done in the early afternoon, and was able to log over 35 miles on my bike for the Great Cycle Challenge I'm attempting this month. 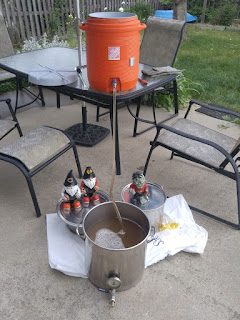 My OG was a little lower than expect, but not so much that I really care. Lower alcohol is fine for this beer. 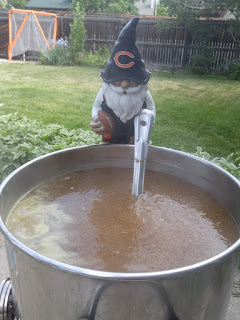 Fermentation is well underway. I have a blow-off tube which may or may not have been needed. The aroma off the fermentation is very much what you'd expect in from a Saison.

I expect that I'll be drinking this beer in early July. Based on last year's comments, this beer won't last a whole month once I start drinking it.

As always ... stay tuned on the regular SheppyBrew Channels to see what is happening with this beer (and many others): SheppyBrew's Facebook Page; Sheppy's Twitter Feed; SheppyBrew's Instagram Page; and SheppyBrew's Website. Of course, don't forget to visit this blog often as well!.
Posted by ESheppy at 6/15/2016 11:05:00 AM