P is for Pints Pub 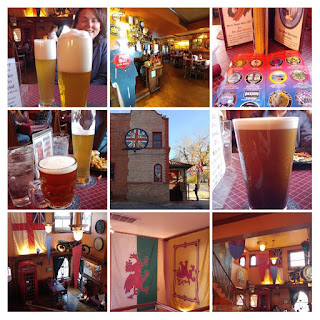 As I mentioned in O is for Our Mutual Friend Brewing Company, I had already visited my "P" brewery before doing OMF.

Let me step back a little in case you are new to this and wondering what the heck I'm talking about.

You can read every single one (including this one) at  Sheppy's Blog: A to Z.


P is for Pints Pub 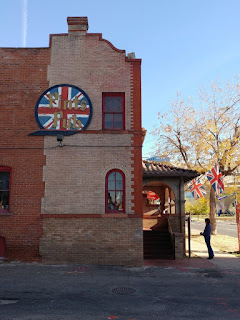 I took off work on a beautiful November Friday a couple weeks ago and the SheppyBrew Beer Model and I decided to head to Downtown Denver for lunch.

Pints Pub has apparently been in this location, brewing beer since 1993, and I'm embarrassed to say I didn't know it existed until I started searching for my "P" brewery. They seem to be doing just fine despite my ignorance, though.

This place is unique on my list. Not only do they make and serve full menu of food (rare for the type of breweries I tend to visit), but it is really very much an English-Style Pub. I've never been in anyplace quite like it. 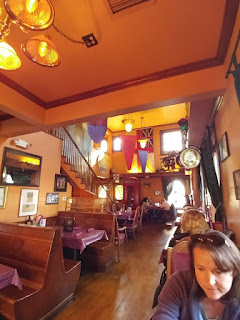 
Pint's Pub is a traditional British brew pub that strives to be your "local" regardless of your locale. Here at Pint's, you'll find the charm and personality of the "local", a place that serves as a crossroads for society, where good beer , freshly prepared good food and as importantly, good conversation are on the bill of fare.

They are big on cask conditioned "live" ales. 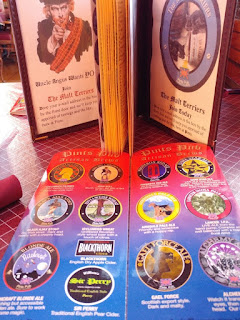 The first beer I had was Czechmate Pilsner. It is a classic Bohemian style pilsner. I am very much a fan of this style, and this one didn't disappoint. Crisp, clean and rich with a refreshing floral hop finish. Imported Bohemian Pilsner malt in generous quantities provides for great body.

My Beer Model  had Idyllweiss Wheat, which is supposed to be a classic German wheat beer with the  banana and clove of the Weihenstephen yeast. I guess it was for the most part, but I think it was a little tart, maybe almost sour. Not our favorite, but luckily the place has plenty to choose from. 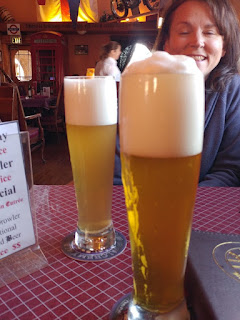 I also gave one of their "Live ales" from the hand pump a try. Lancer I.P.A. was your typical English-Style IPA served from a cask. Obviously a bit warmer and a bit flatter than the beers I'm used to drinking. It was very pleasant drinking with lots of English-style hops and a nice British malt backbone. 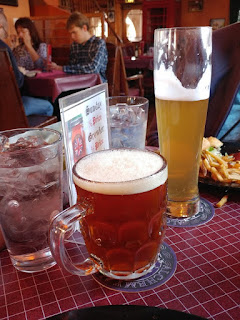 And then I had their dry, Irish stout, Black Ajax Stout. Served from a nitro-tap, it was black with the typical thick creamy head and all the roasted coffee and chocolate notes you want in this style. It was very smooth and easy drinking. At 4% ABV, this is the sort of beer you can have pint after pint after pint. 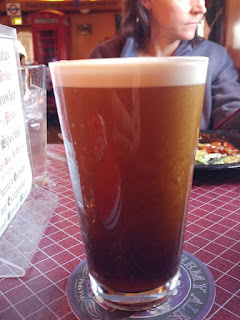 As I mentioned, this place has a full food menu. The food is mostly what you would expect from an English-style pub, I think. I had a "Banger Burger" with fries ... which I thought was delicious. I don't remember what the Beer Model had, but she did enjoy her meal as well. 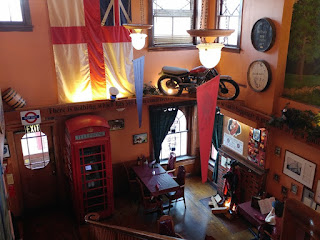 The atmosphere is fantastic as well as the food and beer. You really feel like you are in an old-style English pub. This is very unique in the Denver area.

I really enjoyed the whole experience, and I'm going to have to try to make my way down there again to try more of the beers and some different food items on the menu.

I whole-heartedly suggest this place. 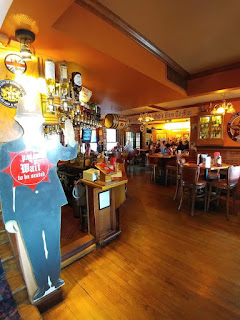 It is walking distance to the Denver Art Museum, the Main Denver Public Library, the Denver Mint, Denver City & County Building, and many other cool cultural places downtown.

They also have free parking .. which I missed when I visited. Make sure you take advantage of that. It is across W. 13th Ave.

Actually, I have a place in mind. Really very different that the other places I've visited on the list.