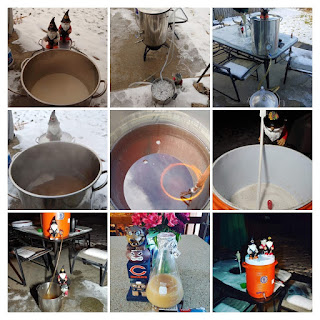 This past weekend, I brewed my 19th batch of beer for the year.

It was my 13th new recipe this year. My 6th lager.

Last week, I gave you a little heads-up that it was coming in What the Helles.

The beer name is What the Helles Dortmunder, and you can take a look at the recipe by following the link.

It is actually very similar to the Schreck Gartenzwerg Pilsner that I made a couple months ago, but should be richer, more bready, with a more substantial mouthfeel and a maltier, less bitter flavor.

Anyway ... I got started brewing very early in the morning.

When I went out, I startled a skunk that was wandering along my fence. Luckily, it was far enough away that I wasn't in danger of getting sprayed, but it did get my heart pumping a bit early in the morning. 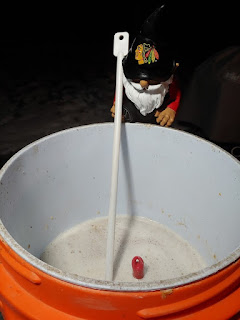 As you can see in the pictures, my patio wasn't clear of snow. We've gotten more snow in late fall than I remember getting in quite awhile. We might be in for a fun winter.

My mash was about perfect. My strike temperature was pretty much right on to get my mash temperature exactly where I wanted it. 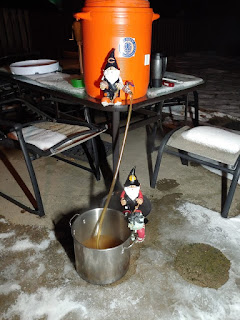 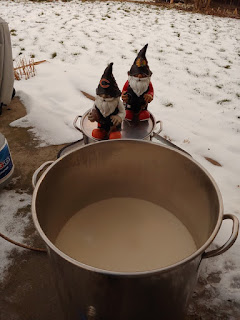 There was nothing I remember unusual about the boil. 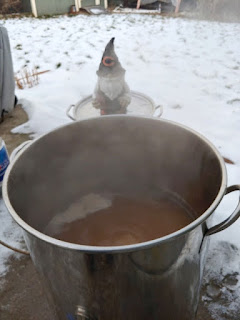 Got everything chilled fine. 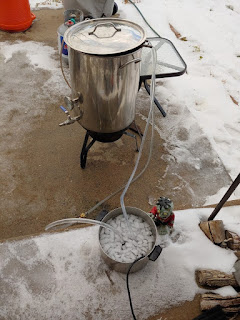 The beer was very light colored and clear by the time we transferred to the fermentor. I actually got the wort cool enough that I pitched the yeast right as I was transferring. 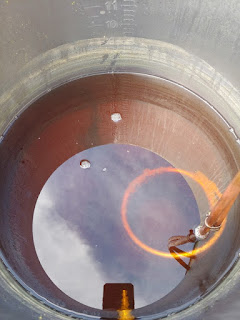 And I finished brewing before 10AM and was completely cleaned up before the Broncos game started at 11. 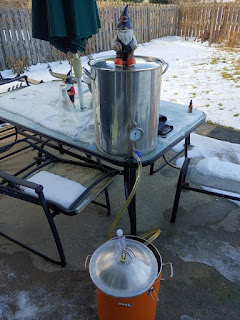 I tried something new with my Anvil Cooling System, which I'll tell you about in a future blog post. See Sheppy's Blog: Anvil for more on that.

The beer was rocking sometime over night. It has been going strong for a few days now.

I'm looking forward to drinking the beer in mid to late December.

Email ThisBlogThis!Share to TwitterShare to FacebookShare to Pinterest
Labels: Anvil, Brewing, Lager, SheppyBrew, What the Helles