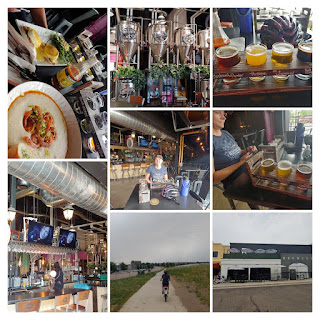 If you've been following along on my Sheppy Brew's A to Z Denver Breweries series of posts ... you know that usually the Beer Model (aka my wife) and I try to bike to various breweries around our area.
About a year ago, we bought her a new Pedego E-Bike, which helped tremendously increase her biking range, and allowed us to cycle at about the same general speed.
I know a lot of cyclists look down on E-Bikes, but I personally am a fan. I think our situation where I cycle a ton and she doesn't is a perfect example of what is great about them. She and I can ride together without either one of us being frustrated by the speed or intensity of the ride.
I had never ridden one, though. This past Saturday, I decided to give one a try and rented one at a local bike shop ... GoodTurn Electric Cycles.
And what better destination to try, but the next brewery on our list ...
G is for Grist Brewing Company (Rare) 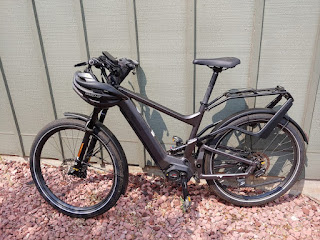 Rare by Grist is located in Lone Tree, Colorado close to the Park Meadows mall at 9535 Park Meadows Dr,Unit F, Lone Tree, CO 80124. It is only a couple blocks off the C470 bike path, which is very convenient for cyclists such as ourselves.
We started our ride on the Platte River bike path close to the C470 path, making it around a 10 mile bike ride. 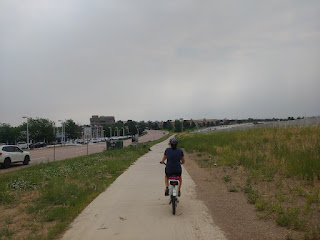 With the peddle assist on the e-bikes it didn't really take us long at all to reach the Brewery.
It isn't labeled real well, and there isn't great bike parking, but it is a fantastic space. 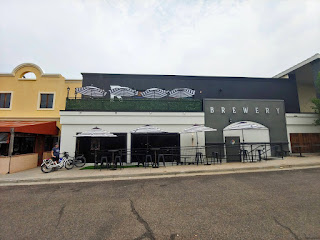 There are all kinds of things to look at inside the bar / brewery area. I could have taken tons more pictures than I did. But then, they really would not have done the decorations justice. You'll have to visit yourself to get the full affect. 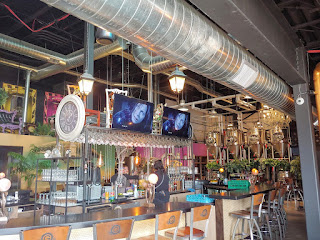 As usual, we ordered a couple of flights. This is a brewery that serves food, so we ordered brunch as well.
They have a nice up-to-date menu online. If you'd like to see what all they have as you read this ... check out their menu. 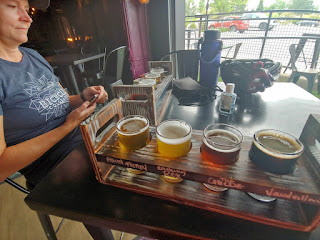 Our first flight was: 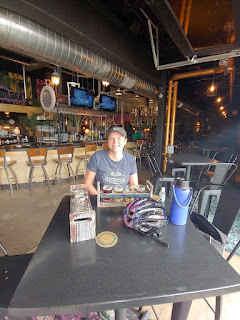 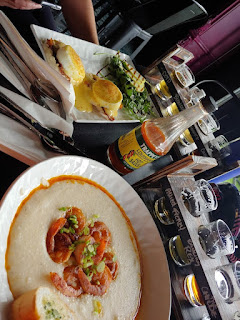 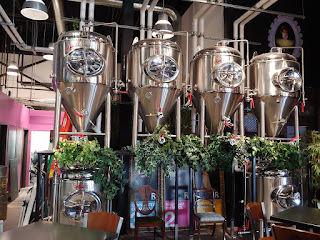 All the beers were great. We liked them all. The Beer Model's favorite was the Trippinwitz. I wasn't able to declare a favorite. They were all too good.
And the food was fantastic too. I had a Shrimp and Grits. The Beer Model had Bacon Benedict. 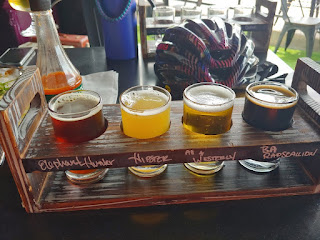 After beer and food, we got back on our e-Bikes and headed back down to the mini-van. 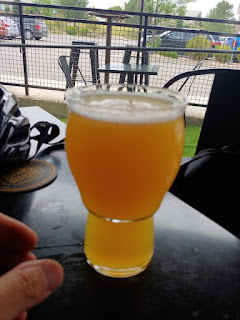 Since I had the e-Bike for the whole day, I let the Beer Model drive the mini-van back home with her bike while I raced her home. She won, but not by too much.
I showered and rested a bit and then took off again on the rented e-bike around my usual riding spots. It was fun. I actually pushed it pretty hard and got a good workout.
I am not ready to own an e-bike yet. I actually think it would be a nice thing to have when (if) I ever get back to going into our office for work. But, honestly, I still prefer a bike that is powered completely by my own legs.
Some day, maybe. Not today.