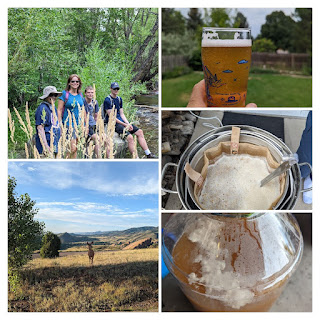 My parents were visiting this past weekend, and because of that, I had no plans to brew.
When we were talking about things we might do on Sunday, my dad asked me what I would usually do on a Sunday if they were not here.
As most of my Brew Days are on Sunday, brewing beer came up as something I might do on a Sunday.
He thought it might interest them to watch me brew.
Since I didn't have any grains my initial reaction was that brewing wasn't really a realistic option.
But ... one of the wonderful things about living where I do is that I have access to multiple Homebrew Shops within reasonable driving distance.
I called Tom's Brew Shop to make sure they were open on Sundays. They are. I was actually surprised to learn that they open at 9AM on Sundays. I sort of assumed 10AM. 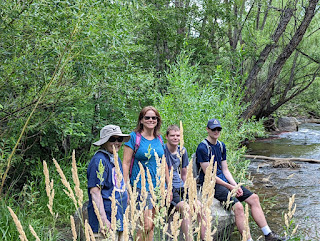 So ... I quickly searched through my recipes for something I could use for a quick recipe, and decided my Shoddy Pale Ale would make a lot of sense.
I had a pack of Voss yeast already and most of the hops. All I would need at the brew shop was the grains.
So, I filled my Anvil Foundry, set the temperature to get up to 150F and we headed off to Tom's Brew Shop.
When we returned, the water was at strike temperature and we added the grains. 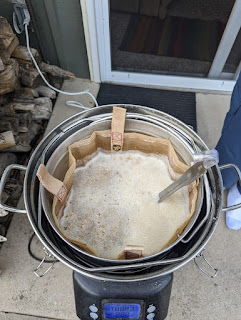 My mom watched me and took notes. My dad was around for most of the brew day. I didn't take as many pictures as I usually do. Just didn't think of it.
But everything went very well.
My mom did add some of the hops, so now we can say she is a brewer. (she doesn't really drink beer, but that doesn't really matter ... she is now a Home Brewer) 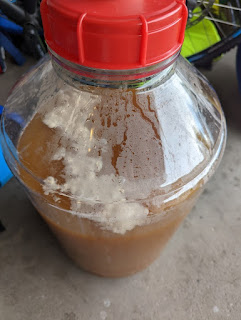 We got the yeast pitched and set it in the garage to take advantage of summer temperatures with the Voss yeast sometime in the afternoon.
I didn't really track how long the whole brew day took like I usually would with a Short and Shoddy beer.
I also didn't measure the OG ... just sort of assumed it was on plan.
The Voss yeast took off within a couple of hours, and by the morning, based on the Tilt, it was already pretty close to the planned FG.
I'll probably keg it before the weekend. 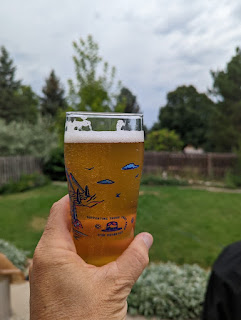 It was fun. As far as I remember, this is the first time I've brewed on a day I was unprepared at the beginning of the day.
It turned out well enough that I might do this again sometime.
As always stay tuned on the regular SheppyBrew Channels to see what is happening with biking, brewing, barbequing, and other things: SheppyBrew's Facebook Page; Sheppy's Twitter Feed; SheppyBrew's Instagram Page; and SheppyBrew's Website.Of course, don't forget to visit this blog often as well!
Go Rockies!
Posted by ESheppy at 7/26/2022 07:06:00 AM